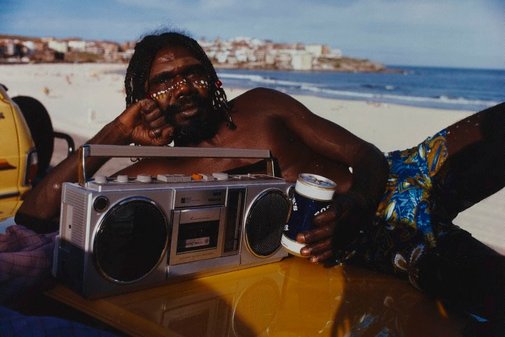 ‘The movie star’ is a colour photograph of the Australian David Gulpilil who first came to public notice as a young man in the 1971 movie by British director Nicholas Roeg – ‘Walkabout’.

Photographed on Bondi beach, Sydney, wearing board shorts and face paint, Gulpilil reclines on the bonnet of a car, cradling a ghetto blaster and a tin of Fosters beer. This single image presents, more than 20 years after it was made, an exceptional amount of information which is revealing of the local condition. The title ‘The movie star’ is both factual and ironic. Gulpilil is a movie star with a career spanning 40 years, yet the actuality of Aboriginal movie stars registering as normal, or for that matter not registering at all because it is normal, is a fairly recent phenomenon. When Moffatt made this photograph in 1985, seeing Aborigines on Australia’s iconic beach would have been highly unusual, despite the supposed egalitarianism of Australian beach culture – let alone Australian culture in general.

Gulpilil was cast in ‘Walkabout’at the age of 15 when Roeg was scouting locations in Northern Australia. A Yolngu dancer from Maningrida in Arnhem Land, Gulpilil went on to have a role in ‘Crocodile Dundee’ (1986) amongst many other films and most recently appears in ‘Australia’ directed by Baz Luhrman. Despite this visibility and the increasing numbers of other Aboriginal actors over the last 20 years, the presence of the indigenous people in urban environments, let alone in the country is received in a complex fashion.

Moffatt presents Gulpilil with a disarming matter of factness. There is no reason why a man might not lie on a car bonnet at Bondi beach wearing face paint, for example, zinc cream, board shorts and be holding a ghetto blaster (which is playing Michael Jackson) and a can of beer. At issue, then, is the subject’s blackness, and even more, his race, that of being Aboriginal.