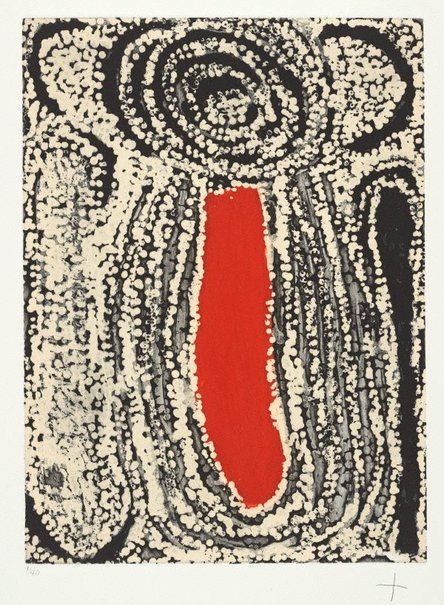 This etching depicts designs associated with Wirrulnga, a rockhole site in a small rocky outcrop east of the Kiwirrkura community in Western Australia. In ancestral times a group of women of the Napaltjarri and Napurrula kinship subsections camped at this site, after travelling from the rockhole site of Ngaminya further west. The women are represented in the etching by the two arc shapes beside the roundel.Wirrulnga is a site which is associated with birth and the lines adjacent to the roundel symbolise the extended shape of a pregnant woman of the Napaltjarri kinship subsection who gave birth at the site. While at Wirrulnga the women also made spun hair-string with which to make nyimparra (hair-string skirts), which are worn during ceremonies. From Wirrulnga the women continued their travels north-east to Wilkinkarra (Lake Mackay). As they travelled they gathered large quantities of the bush food known as kampurarrpa or desert raisin from the plant Solanum centrale. These berries can be eaten straight from the bush but are sometimes ground into a paste and cooked in the coals to form a type of damper.

Browse other works by Ningura Napurrula