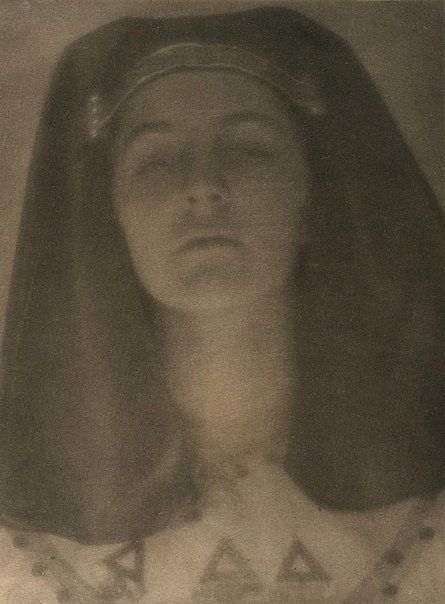 Although Herbert French was a founding member of the Photo-Secessionists in 1902, he worked in relative isolation from his hometown of Cincinnati where he was employed as a ‘prominent officer’ at Proctor and Gamble.1 French perhaps best described Alfred Stieglitz’s true ideal of an amateur as one who ‘practices photography for no other purpose than the pleasure it gives himself’.2 While French’s work was praised by his colleagues, he was reluctant to publicly exhibit it and his private practice would often consist of creating albums of photographs to illustrate favoured literary texts for his own library. His one solo exhibition at gallery 291 in 1906 consisted of such works, including images based on Alfred Lord Tennyson’s ‘The idylls of the king’ 1859.

‘Egyptian princess’ was reproduced in ‘Camera Work’ in 1909, where French’s photographs were described as being ‘exceedingly sensitive’ and ‘indubitably a factor in American pictorial photography’. The work is indicative of the shift in the contemporary practice in America from impressionist-style landscapes to aspects of symbolist art. French imbues his female figure with a certain mystical gravity, portraying her as an ethereal being to evoke the feeling of an ancient past.