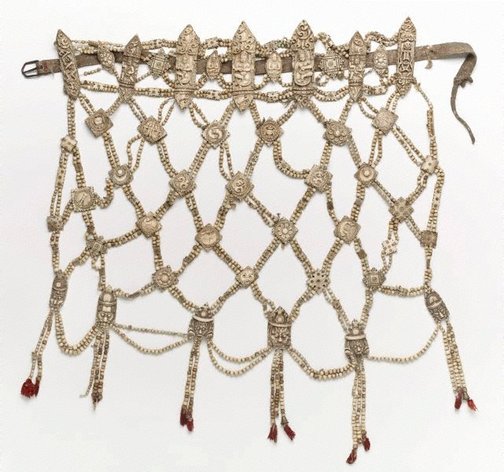 Aprons which exist almost in their entirety like this example are very rare. The different styles of carving and variations in the quality of workmanship indicate that this apron is a composite, fitted with reassembled beads and medallions. Tantric practitioners use bone aprons in ritual dance and advanced initiations. With repeated use, the medallions abrade and the delicate strings break. Repairs are made by restringing new pieces or reusing beads from other damaged aprons. Because of the reassembly, the exact date of the apron or its original iconographic program is unclear.

Aprons are typically made from human bone collected in cremation grounds and charnel fields. The use of human bone is the ultimate symbol of renunciation (Huntington and Bangdel, 'Circle of Bliss: Buddhist Meditational Art', 2003, cat. 105). Practitioners transcend the physical body and the phenomenal world in their religious pursuit.

Buddhas like Vajrayogini, Hevajra and Chakrasamvara that feature in the Highest Yoga Tantras, the most advanced meditations within Vajrayana Buddhism, typically wear a set of six bone ornaments, which includes an apron. The ornaments represent the enlightened qualities of six Buddhas (Akshobhya, Ratnasambhava, Amitabha, Amoghasiddhi, Vairochana and Vajrasattva) and symbolise the six 'paramitas' or perfections (patience, charity, meditation, discipline, perseverance and insight) that form the core of Tantric Buddhist methodology (Huntington and Bangdel, cat.105).

The practitioner wears the apron (and the other bone ornaments) to envision him or herself as identical to the deity that is the focus of the meditation and internally realises all of that being’s enlightened qualities. In other words, through such meditations, practitioners transform from the condition of an ordinary person to that of a fully awakened Buddha.

The reassembled pieces on the top row of this apron show three fierce female figures, two sword-wielding male protectors and two seated practitioners. Skeletal figures known as 'cittapati' leer and mock illusion as they dance at either end of the top row. The medallions on the remainder of the apron show a variety of motifs, including geese ('hamsa'), skeletons, a fly-whisk and the crescent moon and sun - a common symbol in Tantric imagery. The apron also includes motifs like the lotus ('padma'), endless knot ('shrivatsa'), vase of plenty ('purna ghata'), parasol ('chattra'), victory banner ('vijaya dhvaja'), wheel ('chakra') and pair of fish ('matsya'), which belong to the 'ashtamangala' or set of eight auspicious signs [the conch ('shanka'), which would complete the set of eight auspicious signs, is missing on the apron]. Within the Tibetan context, the eight symbols represent the body of a Buddha (Robert Beer, 'The Encyclopedia of Tibetan Symbols and Motifs', 1999, 173). Thus, on the apron, the 'ashtamangala' medallions reiterate the practitioner’s identification with a deity or Buddha and mark his or her attainment and meditational success.