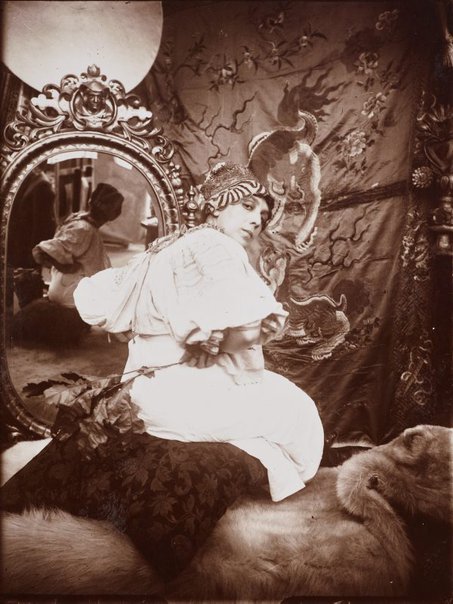 The Czech graphic artist and painter Alphonse Mucha’s idiosyncratic aesthetic revolutionised poster design. His use of decorative patterning, pastel colours, flat planes and sinuous form became synonymous with Art Nouveau and distinguished his designs for posters, advertisements, postcards, magazine covers and decorative panels as well as jewellery and fabric design. While he primarily worked with print media, Mucha began to work with photography in the early 1880s to produce preliminary studies and reference material for his graphic work. These photographs not only expose Mucha’s working methodology and the cluttered interior of his studio but also elucidate his approach to composition and penchant for ornamentation.

Having lived in Paris since 1887, Mucha moved into a studio with large windows and a glass ceiling that could accommodate his photographic pursuits in 1896. Many important artists, writers and musicians visited this studio and it was also the setting for one of the earliest cinematic projections by the Lumière brothers. In 1894 Mucha designed a poster for a French production of Gismonda starring the famous actress Sarah Bernhardt. Bernhardt was so impressed she offered Mucha a five year contract to produce her future posters and also stage and costume designs. This formative encounter with Bernhardt dramatically shaped Mucha’s career.

This photograph of Bernhardt recalls his other portrait studies of models in subtly contorted positions. With her back to the camera, Bernhardt peers over her shoulder with her hands resting boldly on her hips. Most of Mucha’s photographic portraits were not taken with a specific project in mind. Rather, he would have his models improvise a number of postures in front of the camera for future reference. Experimental and intuitive in his approach, Mucha assembled a photographic archive of gesture. Amongst the highly stylized mise-en-scène of these studio portraits, several objects reappear frequently, specifically the embroidered textile and the ornate mirror that feature in this photograph.

Browse other works by Alphonse Mucha