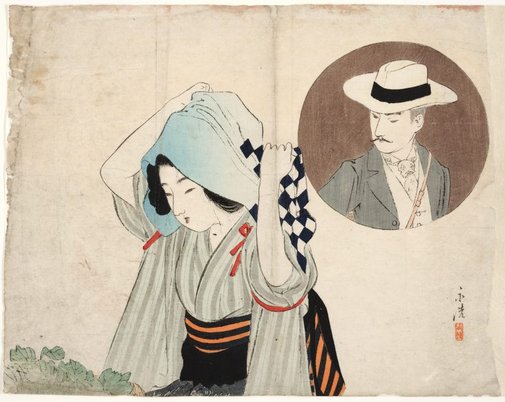 Depicting a young girl dressed in the traditional kimono covering her head with a towel while a man, dressed in Western garb and sporting a thin moustache, looks down at her from a round cartouche, this print belongs to a particular genre of woodblock prints called 'kuchi-e'. Literally ‘mouth pictures’, 'kuchi-e' are frontispiece illustrations produced for publication in romantic novels or literary magazines during the 1890s to 1910s. They were designed primarily as independent images meant to evoke the moods and characterisations of the novels they illustrated and to attract the interest of the readers. 'Kuchi-e' featured mainly romanticised depictions of women with delicate physiognomy in demure poses, based on the aesthetics of 'bijin-ga' of Edo period woodblock prints. The beautiful women are however rendered with a higher degree of realism, a result of the growing influence of Western art on Meiji period painting.

Tomioka Eisen was born the son of a minor samurai in Nagano Prefecture. In 1882, he started his training with Kobayashi Eitaku (1843-90), a Kanō painter working in Tokyo. In 1900, Tomioka resigned from his post at the Army Staff Office to concentrate on his career as painter and illustrator.