Portrait of my mother, 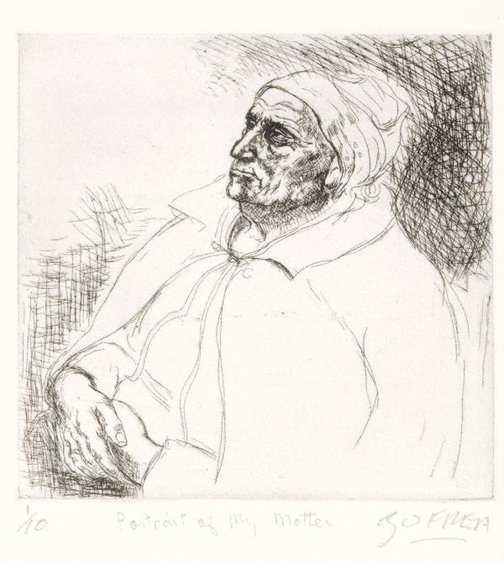 Salvatore Zofrea was born in Borgia, a town in Calabria, Italy and arrived in Australia as a child in 1956. He attended classes at North Sydney Technical College under Henry Justelius, with whom he painted on weekends, the Julian Ashton School and East Sydney Technical College. In August 1971 he travelled to the UK and Europe. He re-visited Italy, including Borgia for the first time in 1982. His childhood in Borgia, emigration to Australia with his family and his early experiences in Australia are increasingly the subjects of his art, particularly his series of prints of etchings and woodcuts.

The Gallery has twenty etchings made by Zofrea in the 1970s, as well as the related copper etching plates. About his mother, Zofrea wrote: "One of her greatest pleasures was to cook for me when I entertained friends: this was a way of showing how much she cared for me and for my work. She was always very interested in the progress of my paintings and often used to sit up with me in the evenings while I worked. Her comments were always appreciative: 'That angel's got beautiful hair!', 'That woman's got very nice bosoms'. We'd often talk far into the night and in that last year of her life she increasingly reminisced about her childhood and early life in Borgia with her favourite sister, Lucia". (Stephanie Claire and Anna Waldmann, 'Salvatore Zofrea', Sydney: Hale & Iremonger, 1983, pg. 53)

Salvatore Zofrea
Portrait of my mother

Browse other works by Salvatore Zofrea