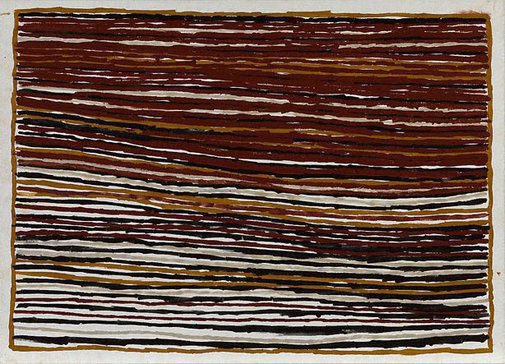 Timothy Cook is an artist from Melville Island, Northern Territory, who paints through the Jilamara Arts and Crafts Centre.

Inspired by Tiwi ceremonial body painting, in 'Untitled' 2002 Cook has painted alternating horizontal lines of red, white and yellow ochre across the canvas, giving the work its cadence and rhythm. Employing natural ochres against a white ground, in the style championed by the late Kutuwalumi Purawarrumpatu, also known as Kitty Kantilla, Cook has established his place as one of the leading artists of his generation. Cook, like Purawarrumpatu, draws on the distinctive traditions of his ancestors to create contemporary paintings that symbolise the dynamism of Tiwi cultural life and generational continuum of tradition through individual innovation.

Cook refers to the body paint designs used in the Pukumani ceremony, the traditional Tiwi funeral ceremony, one of the cornerstones of Tiwi belief. His art is also closely linked to stories of Purrukuparli, the Tiwi ancestor whose cultural legacy is revealed in the geometric patterns, common in all Tiwi art, which often depict sites of stories of ancestral significance. Each Tiwi artist has their own individual interpretation of the designs.

Browse other works by Timothy Cook