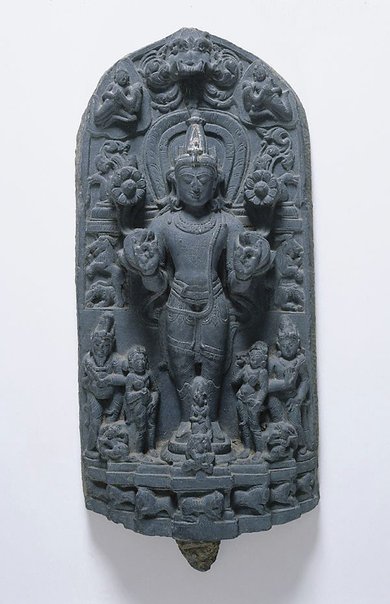 Surya, the universal sun god, is one of the five principal deities of the Hindu pantheon (together with Shiva, Vishnu, Ganesha and Devi). He is identified with Saturn in the worship of the nine planets ('navagrahas'). Worship of Surya has been prevalent in India from very early times (c. third millennium BC). In the early Kushana period (c. first/second century AD) under Iranian influence, there emerged in North India the form of Surya as seen in this relief - the deity in a frontal position, carries full blown lotuses in his hands, and stands on a chariot to which are yoked seven horses. In this symmetrically stele, Surya is crowned by a kirtimukha and accompanied by his two consorts Ushas (Dawn) and Chaya (Shade). Two male attendants Danda (staff) and Pingala (scribe) are also depicted.