Launceston and the river Tamar 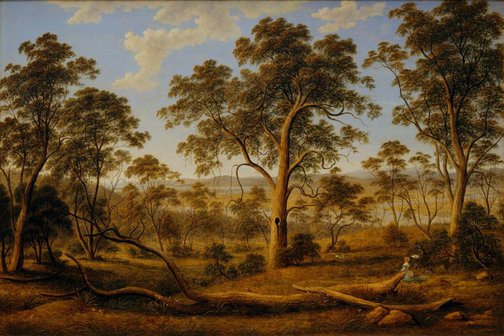 In 1831 John Glover arrived in the Tamar River, Launceston after a five month journey from England with his wife Sarah, and son John Richardson Glover. This painting dates within the first years of Glover's arrival in Australia and testifies to his desire to capture the unique environment he encountered.

A view from Trevallyn of Launceston and the river Tamar, Van Dieman's Land

A Colonial Landscape, with minutely painted foreground. Love birds on the trees, & c.

David Muir (Director) and Malcolm Otton (Producer), Four Colonial painters 1832-1887, Lindfield, circa 1980. The Australian eye series is an historically grouped series of films on Australian painting made by Film Australia with the co-operation of the National Gallery and the Art Galleries in each state. Each program takes a major work of each of the particular artists from the period concerned, and examines that work in detail.

Browse other works by John Glover