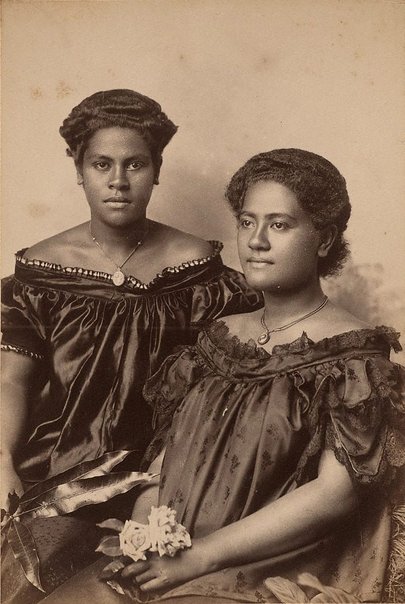 In 1997 an album of 19th-century photographs was given to the AGNSW having been previously shown in the 1997 exhibition ‘Portraits of Oceania’. The majority of the 42 photographs in the album are from the Views trade – that is, they are of people and places in the South Pacific defined as ‘exotic’. There is no information in the album as to the identity of the photographer(s), nor the person who put the album together.

The one photograph which does not conform is this double portrait of two young women. It is a classic studio photograph yet is unnamed. Subsequent research makes it probable that the subject on the left is Adi Vinkaba and on the right Adi Cakobau (pronounced Andi Thakombau), second daughter of Ratu Timoci Tavanavanua and Adi Tupoutoa. Adi Cakobau was born in 1876 and died in 1952. She was sent to Tonga as a bride for ‘King George’ Tupou II but they never formally married. She appears in at least two books, ‘Wanderings among South sea savages and in Borneo and the Philippines’ 1910 by H Wilfrid Walker (with a photograph of her at her house at Navuso), and in ‘The venture book’ 1926 by Elinor Mordaunt.

There are a number of similar portraits of Adi Cakobau probably taken at the same time as this double portrait. In one portrait she is alone but wearing the same dress and necklace; in another she is wearing different clothes and is again accompanied by Adi Vinkaba. Perhaps these were celebratory photographs taken for a significant occasion. The flounced, off-the-shoulder dresses, jewellery, hair and flowers are not of the everyday. However, Suva-based photographers were always on the lookout for new commissions. Given the later (1910) photograph of Adi Cakobau, it is probable that this image was taken in the 1890s.