Which way shall we go? 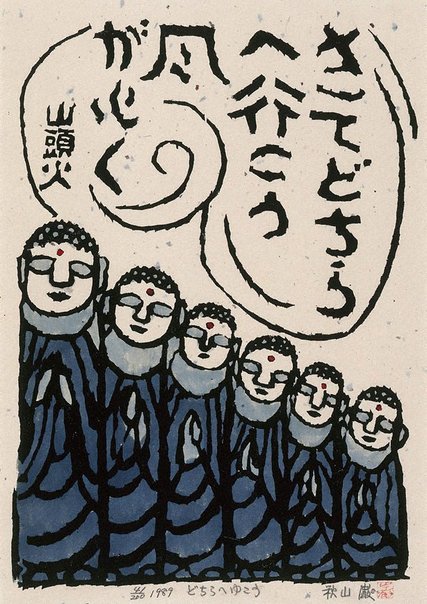 Now resident in Chiba, Akiyama was born in Oita and studied at the Taiheiyo art school under the internationally acclaimed Munakata Shiko (1903-1975), the towering genius who revitalised Japanese folk traditions. Together with Watanabe Sadao and Tsuchiya Masao who also studied under Munakata, Akiyama belongs to the mainstream of the still vitally expressive Japanese Folk Art Movement.

Akiyama's own concern is man's eternal search for spiritual enlightenment. On a personal level he achieves this through walking, drinking and 'haiku': walking exposes him to the full and varied panorama of life; drinking frees the creative muse while 'haiku' is his means of expression. Akiyama devises his own 'haiku', pithy 17 syllable poems whose ultimate meaning resonates beyond the words themselves. He then combines his 'haiku' with one of his guilelessly minimal images, to create quintessential examples of 'haiga' (literally 'haiku' paintings). The 'haiga' style of painting evolved in the early seventeenth century and represents another example of the long Japanese tradition of uniting visual and poetic imagery. "Haiga' are particularly popular with disciples of Zen who appreciated the concise brevity of the genre.

Since 1978 Akiyama has tried to develop a new series of works in which he seeks to capture with Zen acuteness man's spiritual dilemma as he gropes for meaning through the vastness of the universe. In this series, Akiyama minimally deploys black ink onto rough, untrimmed hand-made paper, the surface of which is enriched with flecks of brown fragments of the outer bark of the paper mulberry. Many of the prints in this series depict a determined figure, dressed for combat, his back to the viewer, valiantly confronting the expansive unknown, his spiritual groping trenchantly articulated by one of Akiyama's own 'haiku'.

This particular print, first created in 1978 as part of the same series of 'haiga', depicts six images of the popular bodhisattva Jizo, guardian of travellers and children, not only in this life but also in the next. Jizo appears often in folklore and nursery rhymes and images of him usually made of stone and showing him dressed as a priest, appear all over Japan.

One of the exercises for monks in training is the procession out to beg. Here the Jizo evoke one of these wandering precessions, their searching and humane concern echoed in the 'haiku' above: 'Well, which way shall we go/the wind is blowing.'

Akiyama Iwao
Which way shall we go?

Browse other works by Akiyama Iwao 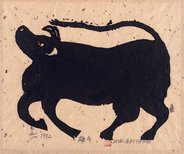