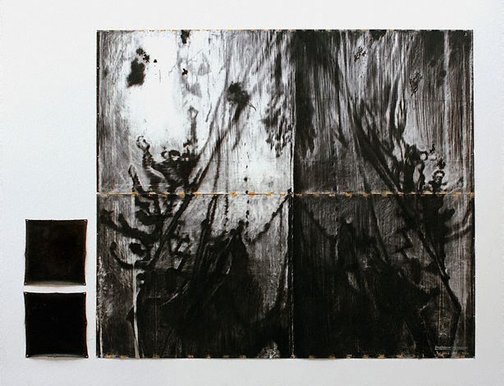 Bernhard Sachs plays with concerns of representation and history, language and myth construction. For Sachs the grand narratives of history become a framing stage for his visual language and are re-presented as expression, rendered principally from photojournalistic sources.1 In borrowing imagery from films, newspapers and other print media, Sachs re-presents and reinterprets images and stories. In their monochromatic and smudgy quality, his drawings evoke such history and memory, much like the effect of retaining and recalling an image, an event, a moment or face. Inspired by filmmakers such as Tarkovsky and Eisenstein, Sachs takes images of real events and layers them with fictitious narratives that confuse and delay the reading of the works. With his interest in making an ontological and philosophical account of the world, he also sources imagery and ideas from philosophy and semiotics.

‘Drawing no 27, psychomachia heroic’ re-presents a scene from Sergei Eisenstein’s 1925 silent film, ‘Battleship Potemkin’, often cited by theorists and artists such as Francis Bacon, whose screaming popes echo the image of the nurse as she is shot in the eye on the Odessa Steps. The film, which traces the story of the revolutionary uprising on the ship in 1905, follows the death of the hero Vakulinchuk, the placement of his body on the Odessa Steps and subsequent massacre of sympathetic locals by the military. The montage quality of the film, which like Sachs’ drawing is in black and white, creates a sense of violence, displacement and trauma. ‘Drawing no 27’ depicts one scene from the film, ‘The drama on the quarterdeck’, where the mutineer sailors rise up against their oppressors, the ghostly image of figures close to the bow dissolving into the paper and forming a mere trace of the tragic event. The prow of the ship bearing down on the camera, or in this case the viewer, brings the action into the gallery space.

The ship, with its hailing passengers, is neither arriving nor departing. Rather it is ‘a moment’ or fragment of time, a trace of a narrative displaced and lost within the filmic, negative nature of the work. The vertical striation on the four panels suggests this movement of time and cinematic action with the indexical squares indicating the closing frames of the film reel. Like many of Sachs’ works, the drawing references more than one history, referring also to the plight of the migrant and his father’s own travel to Australia by ship from Germany. His interest in emigration is both personal and philosophical, particularly its continuous experience across generations and its discontinuous imaging.