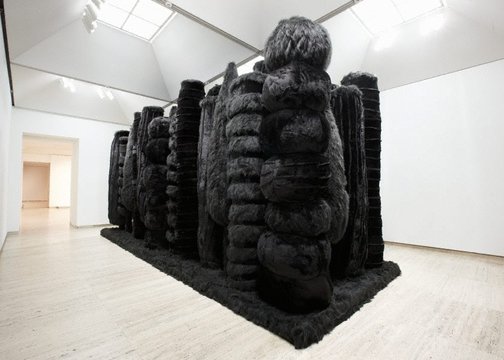 As its title suggests, 'My monument: black garden' 2010-11 is monumental in scale. It is designed to be grand and present, to have a spatial relationship with the viewer that commands respect. And yet what we may expect from a monument – gravitas, solidity, observance and commemoration – is puzzlingly not present. What is encountered in the gallery is a tight cluster of large tree-like forms covered in black synthetic fur, planted on a rectangular fur-clad plinth. Their reduced schematic form is cartoon- or child-like in its evocation of 'treeness' and like giant soft toys they elicit a smiling, wondering response. However they also eerily return us to childhood in adult life, which can be comforting but also disconcertingly regressive. The title is a descriptor as the work is a black garden of sorts – that rarest of non-colours in botany – but how does it function as a monument and what does it seek to commemorate? Monuments are essentially memorials that embody or evoke memory, reminding us of something or someone that has passed but which we believe should be recalled in the future: they are a marker of both time that has gone and of time still to come. In being nominated a monument, Temin's sculpture calls on this history of remembering across time while also delighting us with the immediacy of its absurd playfulness.

Kathy Temin has made monuments since the mid 1990s. While early works such as 'A Monument to the birds' 1994 consisted of a series of modestly-sized poured concrete plaques placed in a garden, Temin soon began working within the gallery space and on a larger scale. Her series of 'indoor monuments' from 1995 tended to hug the walls and floors in a way that made the architecture their own. For 'Indoor monument: soft dis-play' she padded a room with soft sculptures that hung cheek to cheek like so many saggy, white fake fur wall tiles while the floor had white carpeting, turning the room into an entire environment. 'Indoor monument: hard dis-play' recreated a proto-minimal 1958 Frank Stella abstract painting in three dimensions on the gallery floor, expanding it to become a low-down maze that occupied the entire room. The particular painting by Stella 'Hard dis-play' referred to is from a series known as the 'black paintings', some of which have provocative German titles, in this instance 'Arbeit macht frei', 'work makes free', a Nazi slogan that was written over the gates of many concentration camps. Both of these indoor monuments utilised the geometric forms of minimalism as their underlying structure, no matter how aberrant Temin's stitched and constructed versions were.

In referring to minimal structures and to the work of other artists, such as Eva Hesse's organic minimalism or Claes Oldenburg's soft pop sculptures, Temin rehearses and reclaims late modernist history as her own. The fact she does so through the materials and techniques of the home craftsperson or hobbyist further personalises the work as the artist's successes and failures in construction and realisation are on display. In recent years Temin’s sculptures have become more finished as she has left behind the deliberately pathetic modelling of her earlier work; on large scale projects such as this she often employs assistants who sew and stuff to her instructions. Nonetheless, the materiality of her practice remains domestic in origin. Temin's reclaiming of 20th century art history parallels a reclaiming of her family’s own history as Temin has explored her father's internment in Sachsenhausen concentration camp, which also had the slogan 'work makes free' written over the entrance gates. Like the children of many Holocaust survivors, Temin has visited concentration camp sites, an emotionally powerful and harrowing experience. During these visits Temin noticed how many sites are now surrounded by dense forest that edges towards the remnants of the death camps.

Temin has often utilised organic forms in her practice, but when incorporated into her monuments they assume a new significance. In 'My monument: white forest' 1998 white fur trees grow from a geometric path that again echoes the shape of Frank Stella's minimal abstract painting. In 'My monument: black garden' 2010-11, the trees are tightly clustered together forming an almost-solid rectangular prism. There is considerable tension between the geometric rectangular base of this sculpture which groups the trees and their organic shapes, re-enacting the tension between rigorous minimalism and soft sculpture in the 1960s. The containment of the trees into this sculptural rather than environmental form gives them a more monumental mass than the 'White forest', and the cluster of vertical shapes on a plinth base is surprisingly statuesque. Walking around the sculpture, the seemingly impenetrable trees have a small opening on one side, a discrete passage into the thicket. Entering into the forest, the pathway is narrow and not very deep, but at the end is a small bench inviting rest and contemplation. The viewer is surrounded by the dense forms, which muffle sound and perception creating a contained and comforting world, but inevitably the tactile thrusting trees have a phallic resonance and the small gap in their midst only adds to the erotic libidinal play present in the work.

The 'my' in the title 'My monument' indicates the personal history at the core of Temin's commemorative works, and yet the history of the Holocaust is one that extends to all of us as one of the defining moments of the 20th century. The weight of this history might suggest the need for the artist to make a more directly expressive or defined memorial. Yet some of the most moving commemorations of what happened to the Jews in Nazi Europe are affective rather than descriptive, an abstract embodiment rather than a figurative evocation of something so indescribable: for example, the piles of abandoned shoes preserved at Auschwitz or the columns that entrap us in the courtyard of the Jewish museum in Berlin. And yet Temin's monument also slips away from being contained by this history. The 'my' of its title configures us as the subject of the monument as we read it or say it to ourselves or out loud. Through this personalising of the monument as the viewer's own, we share in the traumatic global events symbolised in Temin's family history, but what is commemorated also shifts to our own experiences and what we may care to remember. Working in dialogue with this expanded mnemonic potential is the display context for the work – the art museum. The scale of 'My monument: black garden' 2010-11 has been defined by the space it was made for and its display within the white void of the gallery makes the function of the museum in memorialising culture clear. In titling the work 'My monument' perhaps Temin also refers to the museum's process of exhibiting and acquiring an artist's work, which inserts both the object and artist into the commemorative discourse of art history.

Browse other works by Kathy Temin 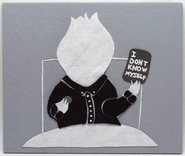