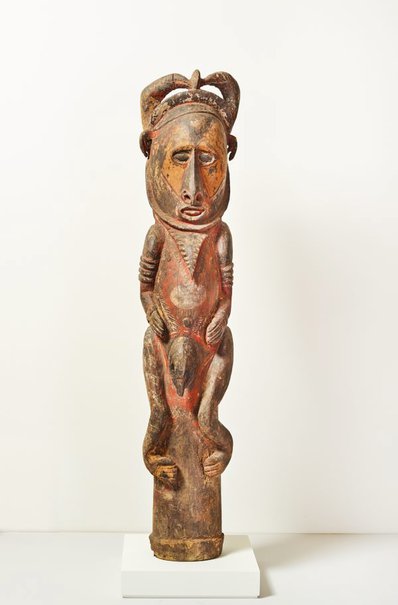 According to Dr Fred Gerrits, who collaborated with villagers to document Abelam cultural history during the 1970s, this 'urungwall' (sacred figure) would have been used exclusively as a resonator during Tambaran cult (initiation) rituals. Kept hidden from women and uninitiated men in the 'sakindungai' (secret area) within the 'korombo' (ceremonial house), 'urungwall' were ‘sounded’ upon arrival, daily during their stay, and again at the departure of the 'ngwallndu' spirits. 'Gwangi' (long bamboo trumpets) were placed into the upper end of the 'urungwall' and blown, with the sound reverberating in the hollow cylinder. 'Urungwall' are considered to be extremely sacred. They were made by and belonged to one person, but they were also used by the whole community.

This 'urungwall' has the face of a 'waiwu' (human) with a long nose, a feature considered beautiful in Abelam society.

Browse other works by Abelam people