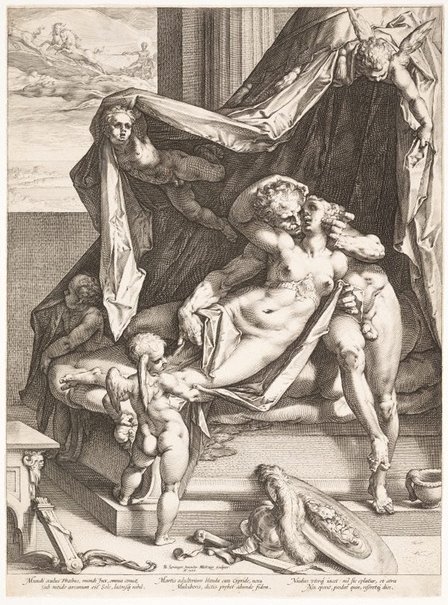 The fulfilment of passion has been one of the great subjects of poetry and art, although seldom has it been treated with such a sense of carnal urgency as in this portrayal from the story of Mars and Venus by the Haarlem-based engraver Hendrick Goltzius. On the edge of a canopy bed, Mars, the god of war, and Venus, goddess of love, entwine in an embrace of uninhibited sexual foreplay, while putti pull aside the bed curtain to reveal the lovers in the act. In the foreground Mars’s armour lies in disarray; to the left a quiver of arrows propped against a small table identifies the figure standing at the foot of the bed as Cupid, who has presumably abetted the lovers’ union. In the background, Apollo drives the chariot of the sun above a seascape.

The subject was described by Homer in Book VIII of the Odyssey and by Ovid in Book IV of the Metamorphoses: Venus, who is married to Vulcan, has an illicit affair with Mars, but the lovers are exposed and humiliated when Apollo witnesses their intrigue and informs Vulcan, who seeks his revenge by ensnaring the faithless lovers in a fine metal mesh as they begin their exertions in Vulcan’s own bed. The anonymous Latin verse at the bottom of the print refers to the implicit morality of the tale: that under the light of the sun nothing, including adultery, remains secret or concealed. However, the emphasis of the engraved image is clearly the erotic abandonment of the lovers, and this takes precedence over Apollo’s role as eyewitness to their infidelity.

Goltzius was one of the outstanding printmakers of the late Renaissance, and his fame and influence in the Netherlands and elsewhere was based on the artistry and unerring technical skill of his engravings. His virtuoso style relied on the capacity of incised lines to start thin and sharp, swell to a certain thickness in the centre, then taper away at the ends; from this he refined a manner of curvilinear hatching in which dense networks of perfectly even lines intersect at lozenges and appear to enclasp the sleek, muscular forms of his figures. The optical surface effects produced by such a determinedly artificial graphic convention can be dazzling.

Goltzius’s engravings represent the apex of Netherlandish Mannerism: an anti-classical, hyper-elegant style based on complex torsions of the human body. The catalyst for this extreme version of Mannerism was Goltzius’s encounter in Haarlem in the early 1580s with the drawings of Bartholomaeus Spranger. Spranger was born in Antwerp but was appointed court painter to Emperor Rudolf II in Vienna, and in 1581 moved with the imperial capital to Prague – another centre of Mannerism – where he furnished the art-loving Rudolf with erotic imagery couched in mythological guise. Goltzius’s work became permeated by Spranger’s influence, and he routinely engraved compositions received directly from Prague. Although after the 1580s Goltzius never again engraved for Spranger, the fruits of their collaboration were some of the most stylish engravings published in the 16th century, in which form and content fit each other like hand and glove.