Expulsion of Eve, series I, number 16 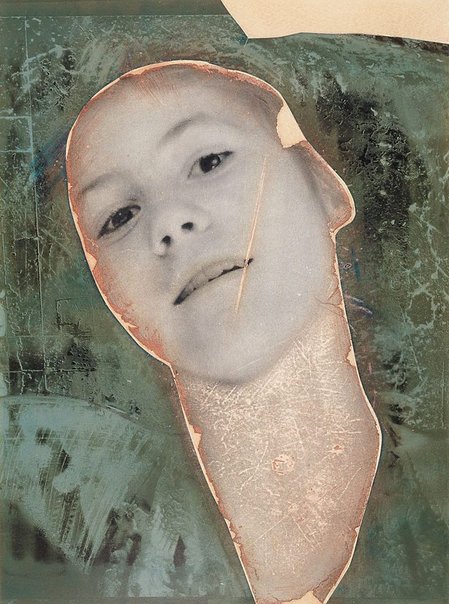 The ‘Expulsion of Eve’ series is in essence a single work which the artist returns to continually to develop and re-work the same image. ‘Number 16’, highly indicative of the series, is a photographic image of a young woman, the print having undergone many transformative processes including being cut out, reapplied, incised, worn back, applied with colour, stripped of colour and re-drawn. Interrogating notions of reality, Breninger expresses his personal and artistic concerns relating to ‘the rift between appearances and what is real’; ideas informed by his deep Christian faith.1

His subject, Eve, is not chosen symbolically as a female archetype; rather, the artist reasons, ‘because I believe in her historically and all humanity is her descendents’.2 Breninger’s Eve, in her features and expression, suggests a presence caught between the worlds of childhood and adulthood, innocence and intent, the temporal and corporeal. While there is a Christ-like surrender in the pose, Breninger’s ‘Eve’ also has a strong correlation with Edvard Munch’s ‘Madonna’, both visually and in terms of the obsessive process by which the artist revisits the image.

The artist’s belief that ‘cameras create an appetite for ghosts, for vapour, for beings of steam that we can never embrace, that will elude us like every photo does’,3 explains his intrigue with photography’s abilities and limitations in recording the subjective. He continued to develop the work with series III produced in 1990, followed in 1993–94 by series IV, comprising male and female faces.

Browse other works by Warren Breninger

Warren BreningerFallen figure from modern times (circa 1973)99.1981
View all
9 works