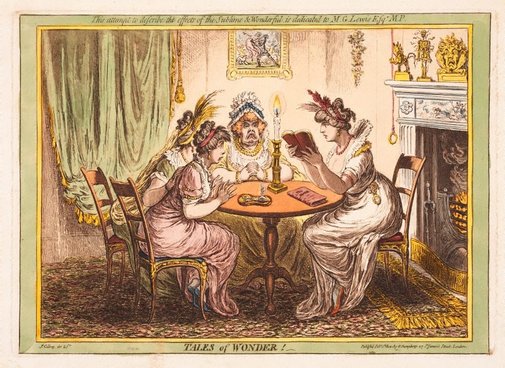 In a fashionable drawing room four well-dressed ladies sit round a small table while one of their party reads aloud by the light of a single candle. The two women on the left lean towards the reader in breathless anticipation of what must be an especially suspenseful passage, while the corpulent matron with her hands clasped registers a look of contained dread – an expression mimicked exactly by the jowly gorgon’s head on the fireplace mantle. Other ornaments include a skeleton with snakes emerging from it, and a dragon.

Decorating the fireplace is a scene depicting Pluto abducting Persephone in his chariot, and on the nearby wall hangs a picture spoofing a mythological ravishment. The choice of décor is no doubt intended to flavour the atmosphere with libidinal threat and supernatural mystery – key ingredients in the popular tales of gothic horror – which the members of this women’s book club seem to be absorbing with a degree of macabre relish. Presumably the party has been assembled for quite a while: the gold watch suspended from the reader’s waistband shows the time as 12.45.

Gillray’s print mocks the craze for gothic sensation, which was at its height around the end of the 18th century. The title implies that the woman is reading from Matthew Lewis’s collection of supernatural ballads, Tales of wonder, published in 1801. On the table lies an unopened volume of The monk, Lewis’s earlier spine-chilling novel whose notoriety was such that its author was forever after known as ‘Monk’ Lewis.

Gillray was the most vigorous caricaturist working in England during the Regency era. He treated the major topics of national politics as well as the trivial affairs of society and the vagaries of fashion and taste. He lived with his publisher Hannah Humphrey in rooms above her print shop in London’s West End. The printing press was on Mrs Humphrey’s premises and newly published caricatures were hand-coloured (under Gillray’s supervision) before being displayed in the shop window.

Fredreric George Stevens and Mary Dorothy George, Catalogue of Political and Personal Satires in the Department of Prints and Drawings in the British Museum, London, 1870-1954, vol 8. no 9932

Browse other works by James Gillray