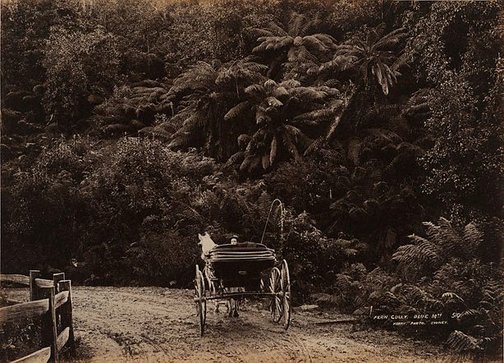 Charles Kerry ran a successful photographic studio, initially for portraiture, but later specialising in ‘views’, from a sumptuous four-storey premise in George Street, Sydney. This business – Kerry & Co – had evolved from a studio which Kerry first opened in 1884. By the 1890s it employed a number of professional photographers, including Harold Bradley and Willem van der Velden, who specialised in city views, and George Bell for country views. Kerry, born near Cooma, New South Wales, in 1858, is credited as the first Australian-born professional photographer. He acquired his early training at the studio of Alexander Lamartinière and by 1883 was a partner. He eventually transformed the business into one of the most thriving photographic studios in Australia. The company won numerous awards at local and international exhibitions and in 1893 photographed a series of paintings at the AGNSW. Kerry retired from the studio in 1913 and died in 1928.

While this photograph is titled ‘Fern Gully, Blue Mountains’, it shows a mountain road, hedged with typical vegetation, including the massive king fern. Kerry’s contemporaries were possessed by fern mania – pteridomania – producing some of the earliest studies and formal collections of this plant type. Fern groves and gullies appeared regularly in art. Eugene von Guérard’s ‘Ferntree Gully in the Dandenong Ranges’ 1857 provided the centrepiece to the fern-decorated Victorian court at the 1862 International Exhibition in London. Some of these images, such as Nicholas Caire’s 1878 photograph of a tiny figure hidden among the massive ferns at Black Spur in Victoria, clearly allude to romantic notions of the human dwarfed in the encounter with nature. Although a young face peers over the buggy hood, ‘Fern Gully, Blue Mountains’ is far more whimsical. It is all circles and curves, from the horse whip to the carriage wheels, the wooden fence and curving road to the plants themselves, and seems to celebrate what one of the greatest 19th-century poets, Gerard Manley Hopkins, described as that time ‘When weeds, in wheels, shoot long and lovely and lush’.1

Browse other works by Kerry & Co