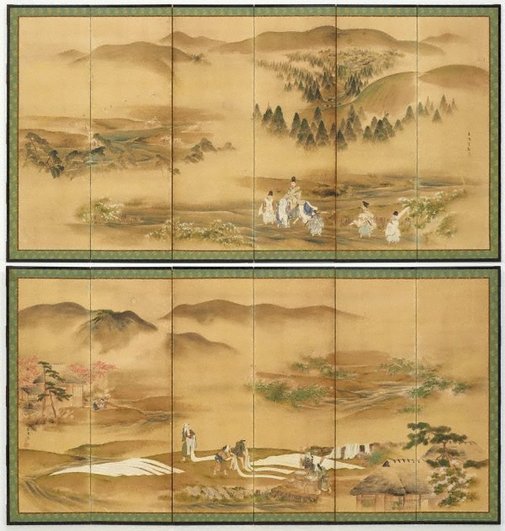 The right screen depicts a courtier on horseback, accompanied by a small group of attendants on foot pausing to contemplate bushes of yellow 'yamabuki' in full bloom as they cross a river. This scene is traditionally interpreted as representation of the evocative landscape around the Jewel River (Tamagawa) in Ide, which has been immortalised by the eminent poet Fujiwara Shunzei (1114-1204), recorded in the 13th century imperial anthology 'Shin kokinshū' ('New Collection of Ancient and Modern Poems'):

As I stop my horse
to give him water,
dew from the yamabuki flowers
is lost in the stream
of Tamagawa at Ide.

The left screen shows a group of woman beating clothes in a tub while others are engaged in putting large strips of white fabric out to dry on the bank of a river. Red maple leaves and blooming bush-clover are indicative for an autumnal setting. This scene illustrates a poem by Fujiwara Nagakiyo (fl. 1294-1310), recorded in the anthology 'Fuboku wakasho':

The cloth that is hung
over the fence for bleaching
catches the morning dew
at the village of Tamagawa.

The Jewel River celebrated here is located in Tetsukuri on the Musashi Plain, west of Edo (today Tokyo). The name ‘Tamagawa’ (Jewel Rivers) was originally used to refer to any riverscapes of extraordinary beauty, as the word ‘tama’ (lit. ‘jewel’, ‘treasure’) was employed as an adjective to describe beautiful, elegant objects. While the Mu Tamagawa, or ‘Six Jewel Rivers’ are all accompanied by a waka poem of the Heian-Kamakura period, they were only visualised in the 18th century, whereby the earliest known example is a set of polychrome woodblock prints by Suzuki Harunobu (1725-1770), accomplished between 1765 and 1770. Harunobu’s set is said to have established the standard iconography for the theme and was emulated by numerous woodblock print artists of the subsequent generations.

pair of six-panel screens (byobu); ink and colour on paper

Signature and seal on both screens.