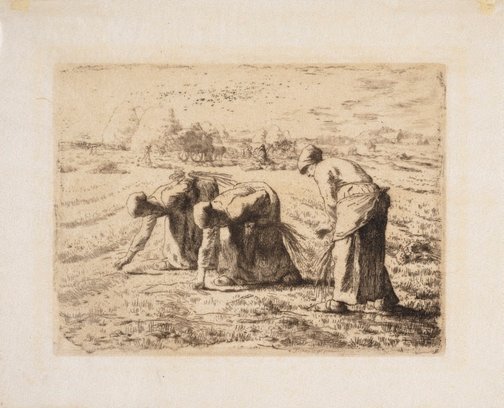 Since the Middle Ages peasants have been represented in the visual arts, mainly as secondary figures to give animation and charm to landscape backgrounds. With the emergence of genre painting they became increasingly important characters for artists. But it was in mid 19th-century France, in the wake of the revolution of 1848, that agricultural labourers and workers generally assumed a major role, with artists responding to the new social and political concerns of the age. In their repudiation of ideal art, the Realists who emerged from the so-called ‘generation of 1830’ resolved not only to record contemporary life accurately in an unvarnished, naturalistic style, enlarging the democratic scope of their subject matter, but to do so in a way that extolled the simple dignity of toiling men and women in all their grinding poverty.

Millet made the hardship of peasant existence the central theme of his life’s work. He is the most famous peasant painter of the 19th century yet admittedly he was infamous in the eyes of the bourgeois public and critics of his day for the unprepossessing attributes of his subjects. Millet’s political outlook was less clear-cut than that of his more staunchly radical contemporary Gustave Courbet, but the fact that he endowed downcast rural workers with pathos and grandeur suggested to many that his work was motivated by disturbingly revolutionary ideas.

Millet was born on the land, the son of Norman peasants, a fact of greater importance in the formation of his art than ideology alone. ‘To tell the truth’, he wrote to his friend and later biographer, Alfred Sensier, ‘peasant subjects suit my nature best, for I must confess, at the risk of your taking me to be a socialist, that the human side of art is what touches me most … The joyous side never shows itself to me; I know not if it exists, but I have never seen it’.

Millet believed in the eternal truths of the French countryside and felt a quasi-religious attachment to its soil: he understood the cycle of the seasons and the forces of nature that shaped the land, and the habits and customs of those who cultivated it. In his book Le Peuple (1846), the great historian Jules Michelet expressed the relationship between the peasant and the soil in vivid metaphors, suggesting that the peasant not only loves and marries the land (‘his mistress’) but is himself composed of the very earth he tills and sows in order to generate new life. According to Michelet, ‘the peasant is not only the most numerous class of the nation, but the strongest, the most healthy, and if we weigh the physical with the moral, on the whole the best.’

Millet received his training in Paris under the history painter Paul Delaroche at the École des Beaux-Arts. He later returned to the countryside and assumed a peasant lifestyle – although he was one of the most cultivated and widely read artists of his generation. In Barbizon, where he settled permanently in 1849, he joined the coterie of landscape painters who had also chosen to escape the corruption of urban life.

Millet’s earliest etchings were inspired by those of his friend Charles Jacque, who had also fled to Barbizon. In 1855 he took up the medium again at the instigation of Sensier– who acted as his go-between with the respected Parisian publisher Auguste Delâtre. Millet’s output was modest, and his best prints were made during a burst of activity in 1855–56 and 1861–63. The fact that he was a compulsive and exceptionally talented draughtsman enabled him to handle the etching needle with a remarkable deftness and lightness of touch.

Millet explored the theme of The gleaners in etching a couple of years before he realised the painted version which was exhibited at the Salon of 1857 and is now in the Musée d’Orsay, Paris. Gleaners came from the ranks of the poorest rural labourers: they followed the harvesters and were licensed to go into the fields after reaping to salvage leftover grains. Millet emphasised the backbreaking toil of the three peasant women by separating them from the activity of harvesting in the background. Their attachment to the earth is stressed by the shapes of their bent poses – contained below the horizon line and echoed by the distant haystacks and wagon.

Browse other works by Jean-François Millet

Jean-François MilletWoman emptying a bucket circa 18629733