Mars and the vestal virgin 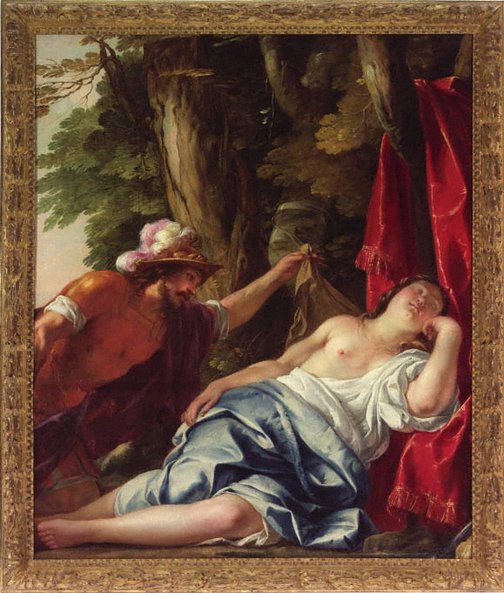 Jacques Blanchard was one of the most important painters active in Paris in the first half of the seventeenth century. His principal rivals were Simon Vouet and Philippe de Champaigne. Born in Paris in 1600, Blanchard served an apprenticeship with his uncle, a little known painter called Nicolas Bollery. He made a trip to Italy, on his way stopping in Lyon, where he worked for a time as an assistant to the painter Horace Le Blanc (1620-24). In Rome (1624-26) he would have encountered the art of Caravaggio and his followers as well as that of the Carracci and their pupils, such as Guido Reni. On his way back he spent some time in Venice (c. 1626-28) where he was particularly affected by the sensuous art of such painters as Titian and Veronese. After a brief spell working in Turin at the court of the Duke of Savoy (c. 1628) he returned to France and set himself up in Paris in 1629.

Blanchard died young in 1638 and his Parisian career thus lasted less than a decade. He is mainly notable as a painter of mythological and allegorical subjects, many of these painted on commission as part of decorative schemes in the houses of a newly wealthy administrative class. For example he decorated a gallery in the Parisian hôtel of the powerful Superintendent of Finance, Claude de Bullion in which a series of mythological scenes representing the seasons, now destroyed, attracted fulsome praise from contemporaries. Although he received a few commissions for altarpieces and painted many small devotional paintings (of the ‘Madonna and Child’, for example), he is memorable not for the religious sentiment of his art, but for its frank sensuousness. It is this which earned him among his contemporaries the nickname of the ‘French Titian’ and which places him in a pivotal position in the development of French art between the eroticism of the court art of Fontainebleau in the 16th-century and that of Boucher in the 18th century.

The subject of our painting is a key episode in the story of the founding of Rome. The vestal virgin Rhea Silvia lay down to sleep next to a stream in a wood, loosened the front of her clothing and ‘opened her bosom to catch the breeze’. The God Mars encountered her in this state and ravished her in her sleep. This encounter resulted in the birth of the twins Romulus and Remus who founded the city of Rome.

The unusual upright, squarish format of the canvas strongly suggests that the painting was originally part of a decorative scheme. It would have been set into the panelling of a room along with other paintings on related themes. It is probable that the scheme as a whole treated the history of Rome or, perhaps more likely given Blanchard’s favoured subject matter, the Loves of the Gods.

There is no commission recorded in the documents or early printed sources which certainly relates to this painting. However, the style and quality of the canvas suggest it is a late work and it could conceivably have been painted as part of a major decorative commission on which Blanchard was working at his death for Claude de Bullion in the Château of La-Grange-le-Roi. Blanchard’s inventory records that the contract for this commission was passed in March 1638, some eight months before the artist’s death. Unfortunately it does not record the subject of the scheme and the identification with this canvas is therefore conjectural.

A soldier discovering a sleeping nymph