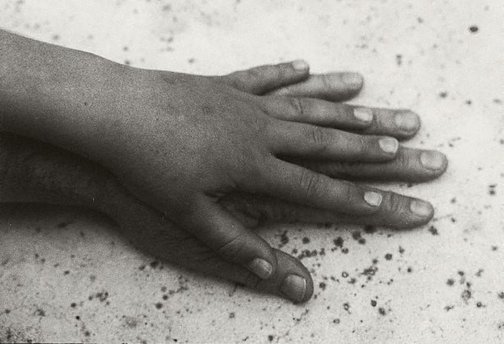 Peter Peryer's photographs deal with the enigmatic and uncanny in a subtle and poetic way. Indeed, the artist does regard his photographs as poems, and that the layers of meaning which emerge through looking at the work is an important part of the subject matter.

This work is part of an ongoing body of work which Peryer has called 'Third Nature'. 'Third Nature' continues the artist's interest in the intimate relationships between the ordinary and eccentric; natural and man made objects; the metaphysical and mundane; history and the present. These relationships are never posed within the photographic frame as being anything other than complementary and overlapping.

'Thea's hand' 1997 is a departure for Peryer in that the work is less than half the usual size that the artist prints to. It is also unusual in Peryer's oeuvre because it is a direct response to a contemporary social problem, that of child abuse. Questions such as where and how an adult man is allowed to relate to a child come into play. Superficially the work contains Peryer's usual interests: a flattening of space against the frame, a play with texture and scale so that the viewer can be confused about the 'real' nature of the objects depicted, and a highly aestheticised sensibility. In 'Thea's hand', a child's hand lies on top of an adult's, which in turn rests on a surface which is flat yet textured like skin. The usual power relations are not only inverted, they are completely collapsed. The pleasures of touch are clearly de-sexualised, and the innocence of such pleasure is made beautiful as well as confrontational.

Peryer spends a great deal of time thinking about and setting up each photograph. He will also travel great distances in order to find the right object to photograph. Consequently the number of images he produces each year is very small.

Purchased with funds provided by the Photography Collection Benefactors' Program 1998