Covered box with design of poppies 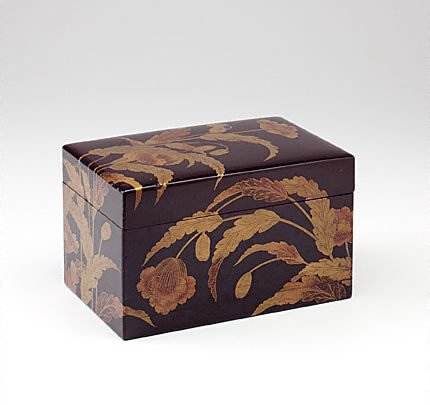 In Edo period Japan, fine lacquer was a symbol of status, prosperity, and discerning taste. Accordingly, the variety of subjects, draughtsmanship and compositional ingenuity of lacquer designs is often superior to that found on the more conventional painting formats. Of the various styles of lacquer - some imported, some native - popular in the Edo period, the most pictorial and Japanese in sensibility was the Kodai-ji style named after a Kyoto temple. This box, most likely a stationery box for writing paper, is a superb example of the Kodai-ji style. Characteristically, the black background provides a dramatic backdrop to a skilful design that artfully defies the shape of the box. The subject of poppies ('keshi') which bloom in May, is an unusual one for a lacquer because Kodai-ji artists evinced a preference for chrysanthemums and the seven flowers of autumn. In the typical Kodai-ji style, both the blossoms and leaves of the poppies incorporate the 'e-nashi ji' lacquer technique in which small irregular gold flakes are sprinkled in several layers in an orange-toned lacquer medium and then polished to resemble a "pear's skin". The subtleties of the deep, rich colouring, together with the masterful composition, make this box an excellent example of the refined sumptuousness favoured by the discerning and wealthy patrons of Edo.