Malaluba’s paintings represent Garrimala, a billabong near where she lives, in the Dhawau clan homeland at Gaga. It is a sacred site for the artist’s mother’s Galpu clan. Wititj is the all powerful rainbow serpent (olive python) that travelled through Galpu clan lands and further on, during the days of early times called Waarr. Djayku the Javanese filesnake is a companion and possible alternate incarnation of Wititj, living amongst the Dhatam, or waterlilies, causing ripples and rainbows (Djari) on the surface of the water (one reference in the cross hatching).

The story of Wititj is of storm and monsoon in the ancestral past. It has particular reference to the mating of Wititj during the beginning of the wet season when the Djarrwa (square shaped thunder cloud) begin forming and the lightning starts striking.

The Galpu clan's miny’tji (sacred clan design behind the lilies) represents Djari (rainbows) and the power of the lightning within them. The sun shining against the scales of the snake form a prism of light like a rainbow. The power of the lightning is made manifest when they strike their tongue, the thunder being the sound they make as they move along the ground. It also refers to the power of the storm created by Wititj, the diagonal lines representing trees that have been knocked down as Wititj moves from place to place. The ribs of the snake also form the basis of the sacred design here. In the mortuary ceremony for Galpu, the slithering line of dancers take on the form of Wititj and coil in the sand searching for their place. As the spirit comes to rest it adopts the metaphor of a python settling its head into the fork in the tree, known as Galmak, the final resting place of Wititj. Other references are the bunches of leaves dancers hold in their hands, wet and shining perhaps like a rainbow.

Purchased with funds provided by the Aboriginal Collection Benefactors' Group 2008 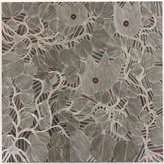 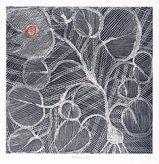