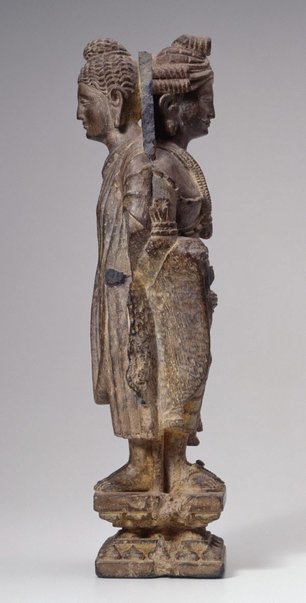 The Gandharan school of Buddhist sculpture was one of the very first that articulated the sculptural image of the Buddha, and hence it is important in a consideration of Buddhist sculpture, as well as Buddhism. This double-sided sculpture features the historical Buddha Shakyamuni on one side and the Future Buddha Maitreya on the other. Shakyamuni can be identified by the 'cranial bump' or 'ushnisha', the elongated earlobes and the rippling monk's robe which covers both shoulders. Maitreya, by contrast, wears the garb of royalty and is depicted as a 'bodhisattva' (a compassionate being who has deferred his or her own Enlightenment in order to help others), with a moustache, distinctive looped hairdo, elegant robes, jewellery and sandals. He carries a waterpot which is a distinguishing attribute of his deity. A two sided sculpture like this, originally probably part of a pillar or similar supporting structure is rare.

Ann Maria Quagliotti, From Turfan to Ajanta. Festschrift for Dieter Schlingloff on the occasion of his eightieth birthday., 'Back to back Buddha and bodhisattva images in Gandharan art', pp. 813-824, Lumbini, 2010, 818 (illus.). Illustration is a diagram