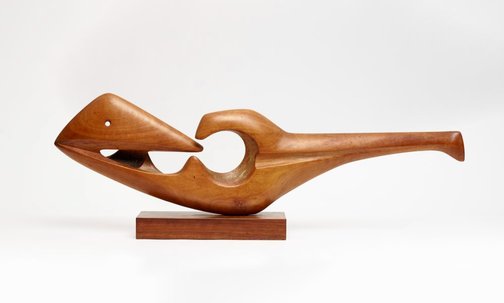 Norma Redpath first studied sculpture at Melbourne Technical College (now RMIT) from late 1949. Her instruction under teacher Stanley Hammond provided a technical platform for her early work, yet her careful study of the sculpture of Henry Moore and Barbara Hepworth also provided a significant aesthetic and philosophical influence on her formative practice. Following their example Redpath began carving directly into stone and wood and became interested in investigating the forms of nature in abstracted sculptural form.

While Redpath was informed by the sculptural practices of the British modernists, she became equally immersed in local movements of contemporary sculpture. By the early 1950s Redpath began to exhibit with the 'Group of Four' along with avant-garde Melbourne sculptors Inge King, Clifford Last and Julius Kane. The work of Danila Vassilieff also proved inspirational, as did the quasi-surrealist representations of landscape forms in the paintings of Russell Drysdale. By the late 1950s, Redpath was critically recognised as a leading contemporary sculptor whose work suggested the Vitalist undercurrents of figurative and natural formations and an abstracted sculptural language that denoted energy and growth.

In 1956 Redpath first travelled to Europe and stayed for almost two years. While mainly based in Rome, she spent significant periods in the United Kingdom, France and what was then Yugoslavia. Whilst in England the Tasmanian-born sculptor Oliffe Richmond introduced her to Henry Moore.

While Redpath became more interested in working in bronze after studying casting techniques in Rome from 1956, she continued to produce carved works in the late 1950s and early 1960s that she exhibited in Australia. These works declare their affinities with the example of Moore and his dictum of 'truth to materials' where the medium was integral to the expressive content of the work.

'Horizontal forms' is an exceptional example of Redpath's early carved works. It is something of a climactic statement of her early influences that was created as the artist was shifting from carving to working in bronze. This strange, biomorphic and embryo-like formation embodies the tension and movement of (as one critic declared) the process of a "curious metamorphosis". It appears as a self-generating life-force coming into being as a hybrid of figurative, organic and machine forms. Redpath skilfully incorporates solid and empty spaces within the dynamic structure of the composition to produce a highly distinctive statement of inner structures and energies.

Browse other works by Norma Redpath