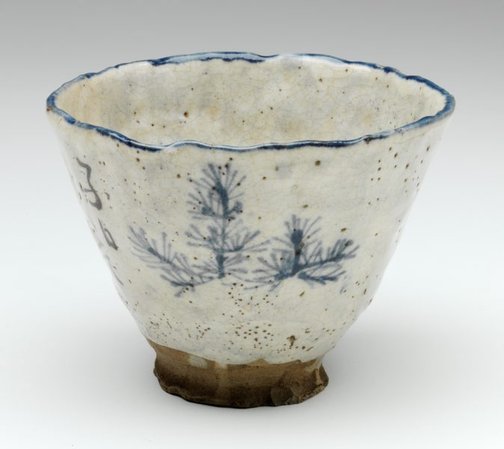 This tea bowl (chawan) has at times been attributed to the Japanese Buddhist nun Otagaki Rengetsu (1791-1875) but was more likely created by one of her assistants, possibly Isso or Kuroda Koryo (1823-1895). The hand-built bowl features young pines and a poem by Rengetsu:

Following a life of tragedy, Rengetsu became a nun at Chion'in, the head temple of Pure Land Buddhim in Kyoto. There she took the name Rengetsu which means 'lotus moon'. In order to support herself, in her late forties or early fifties Rengetsu took up making tea ceramics and soon became renowned for her pottery and painting which she often inscribed with the poems she wrote. Her work was extremely popular and much imitated.

stoneware with underglaze blue and black pigment on white slip