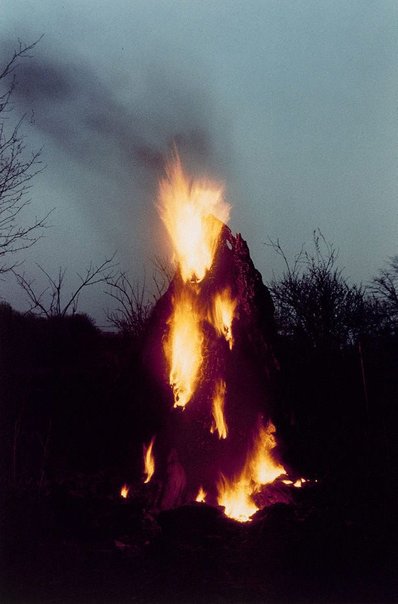 Ana Mendieta was born in Cuba but moved without her parents to Iowa at the age of 13. Her professional parents feared for the future of intellectuals in Cuba and took advantage of Operation Pedro Pan, a Catholic-sponsored program that sent 20,000 Cuban children to foster homes in the 1960s. Coming at such an influential age, this separation and exile coloured the work she was to make in her short lifetime. She also carried with her fond memories of illicit sessions with her nannies, who talked to her and her sister about the Afro Cuban cult of Santeria (the sessions were held secretly as Ana’s parents disapproved of this superstitious combination of Catholicism and Voodoo). This childhood memory partly explains the expressive language that runs parallel with her more systematic university-acquired attitude to performance art. Sometimes there is an uncomfortable tension between her feminist practice and her determination to recapture this magical power that connects the human spirit to the earth.

‘This sense of magic, knowledge and power found in primitive art has influenced my personal attitude toward art making. For the past twelve years I have been working out in nature exploring the relation-ship between myself, the earth and art.’1

At Iowa College, where she studied art, Mendieta was exposed to feminist and performance artists, and became very much aware of the feminist debates that animated intellectual life at that time. Her earliest performance art was shaped by the most rigorous and literal instructional actions and yet they were imbued with powerful ancestral traces. For example ‘Sweating blood’ 1972 involved simply opening a wound in her scalp and allowing blood to slowly trickle down her face. ‘Body tracks’ 1973 enacted a simple bodily gesture of spreading her body against a wall and slowly slumping to the floor, leaving a trail of blood where her arms formed two arcs to the floor.

Iowa and Oaxaca in Mexico are the sites of her ‘Silueta’ series, in which she made templates from her body and used these to create impressions in the landscape. Sometimes these took on a ritual cast, as for example when she used fire or flowers to mark out her absent form. As a feminist, these works could be seen as enacting the effacement of women from the cultural construction of the land or as an over identification with it, as for example with the figure of an earth goddess. Mendieta herself may have been ambivalent about this. In his essay on Mendieta for the 1997 exhibition ‘Body’, Charles Merewether quotes her in one telling passage: ‘The risk was of dissolution, a yielding or trend to lose oneself in the environment instead of playing an active role in it; the tendency to let oneself go and sink back into nature.’2

© Courtesy of the Estate of Ana Mendieta and Galerie Lelong, New York

Browse other works by Ana Mendieta