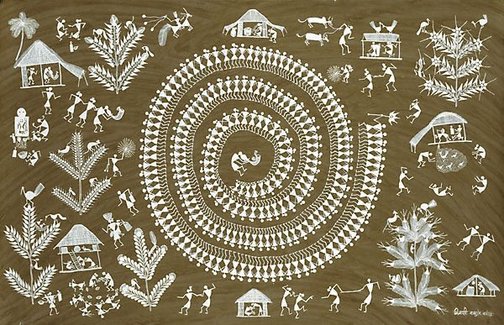 The original inhabitants of India are most correctly described by the umbrella term Adivasi. Under this term a large number of communities exist with different social, religious and artistic practises.

In the early 1970s, due to certain government initiatives, painters in the Warli villages of the Thane district, north of Mumbai began a transition from strictly mural painting to a more portable format of painting on paper. Whereby the earlier mural painting had been performed solely by women on ceremonious occasions such as marriage, the new format which altered the context of production, not only marked a change in technique and material but also expanded the field to include male painters and the depiction of more quotidian subjects.

Minakshi was born into a community of Varli or Warli people in Ganjad, in rural Maharastra. Traditionally she painted on the walls of domestic dwellings but as her practise grew she travelled to different centres around India to exhibit her paintings made using a grass blade, rice paste and poster colour on paper or cloth. Her painting often has the diagrammatic quality of a pictogram but is rendered with an exquisite attention to detail that captures the nuances of everyday life.
In this painting a group of dancers, arm in arm, spiral around a central figure who is playing the Warli pipe ( tarpa) in a celebration of Diwali (the festival of light) in honour of the goddess of wealth, Lakshmi. Lamps and fireworks used to illuminate the night and ward off evil on this festive occasion can be seen held in the hands of the figures on the outside of the dancing group. The artist's eye for detail and delight in celebrating everyday events, weaving them into larger compositions, is a distinguishing feature of her work.

Browse other works by Minakshi