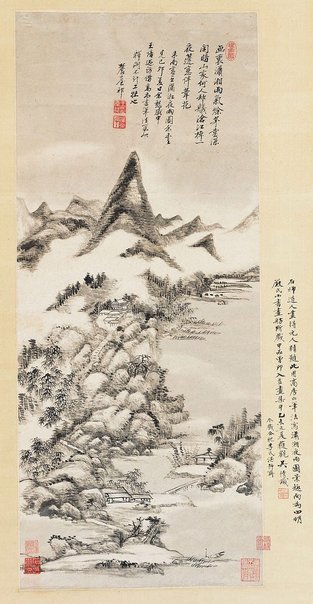 Inscription on top right reads:
"In painting, the atmosphere of rain is faintly sensed. The thatched huts are serene, and the mountain retreats are shrouded in darkness. Who has moored the boat along the river bank? All night its windows keep the blossoming reeds company. I have never seen Mi Nangong's (Mi Fu) painting of Night Rain at Xiao and Xiang River. In the summer of the year jimao (1699), I was shrouded by gloominess, while Yupei came over to visit me. I painted this hanging scroll after the brush method of Gao Kegong to relieve my murkiness, never having taken technique into my consideration. Qi, alias Lutai."

The inscription is followed by two seals: 'Wang Yuanqi yin' (Wang Yuanqi's seal), 'Maojing fu' (Old man Maojing). There are two other seals by the artist: one at the top right - 'shaohua an' (Studio of the swept fallen flowers); the other on the lower left ('shishi daoren'), as well as three collectors' seals.

The mounting bears a colophon by the famous 20th century painter, collector and connoisseur Wu Hufan (1894-1968), which reads: "Shishi daoren's (Wang Yuanqi) painting has the spirit of the Yuan masters. In this painting he used the brush method of Gao Fangshan (Gao Kegong, 1248-1310), representing the idea of the 'night rain at Xiao and Xiang River'. It used to be in the collection of the Yan family in Ningbo, Zhejiang, who considered it of superior quality and published it in their catalogue. I saw this painting in the summer of the year 'yiwei' (1955). Wu Qian (Wu Hufan). The painting is now in the Zhanjingzhai Studio Collection of the Li family in Hefei."

A grandson of the great early Qing painter Wang Shimin, Wang Yuanqi (aliases Maojing, Lutai, Shishi daoren) was the youngest of the 'Four Wangs' and the 'Six Masters of the early Qing' - orthodox school masters active during the early years of the Qing dynasty. He is also regarded as the leader of the Loudong School during his time.

As acknowledged by the painter, the source of inspiration for this painting was works by Mi Fu (1051-1107) of the Southern Song dynasty and Gao Kegong of the Yuan dynasty - the picture is dominated by drifting evening mists; and the broad, flowing ink washes mixed with loose, wet ink dots are typical of Mi and Gao. The picture depicts a section of the famed region in modern Hunan province where the Xiao and Xiang rivers converge. The historic, literary, and physical dynamics of this beautiful area enraptured many Chinese poets and painters. The dramatic seasonal transformations of the region (due to its high annual precipitation) intrigued artists who, following a custom established by the early Northern Song, portrayed its hills and marshes under differing weather conditions and at various times of day and evening. The theme of this painting "Night rain at Xiao and Xiang River" is one of eight standard themes included in the set of the "Eight Views of Xiao Xiang", a favourite genre standardised during the Song dynasty. It is also the most 'mist-obscured' view of the set. Wang Yuanqi uses a slight wash in the sky and the river, as well as drifting cloud to suggest a rainy night atmosphere.