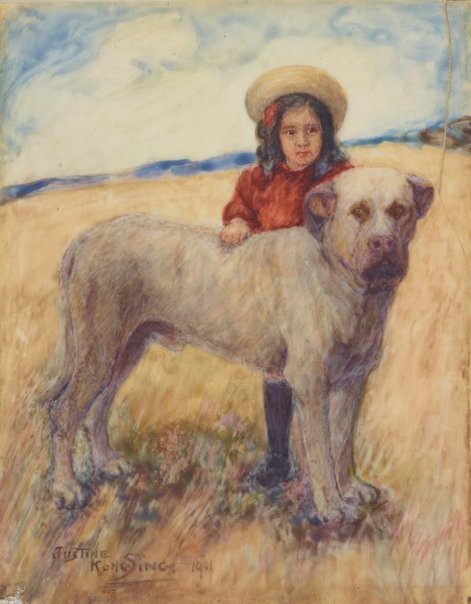 Justine Kong Sing was born in Sydney in 1868 of Chinese and Anglo descent, and grew up in the New England region of NSW. She trained at the Julian Ashton School in Sydney and completed her studies at the National Gallery School in Melbourne. While in Australia she exhibited work at the Royal Art Society in Sydney.

In late 1911 she left for London were she worked as a portrait miniature painter and achieved considerable success. She exhibited her works at the Royal Academy and the Walker Art Gallery in London and the Paris Salon. She lived in Majorca, Spain and another period in London before returning to Sydney where she continued to exhibit works in Australia. She died in Kirribilli in Sydney in 1960.

'Chums' was painted during a period when Kong Sing was working as a governess on the New South Wales north coast. The work's subject is likely to be one of the children under her care. It is a beautifully executed work that makes evocative use of the intimate qualities of the miniature form to tell of the bond between girl and dog. It's loose, divided brush work instils a vigorous expressive quality to the work as does the dynamic, sloping composition of the landscape and cloud formations of the background. The work also reveals the artist’s sophisticated, modern colour sense with the tones of a blue-infused palette set against the red details of the girl's dress. It is an alluring portrait, with the gaze of the child directed sideways, while the attention of the, dog with its piercing eyes, adds something of a psychological edge as it looks toward the viewer.