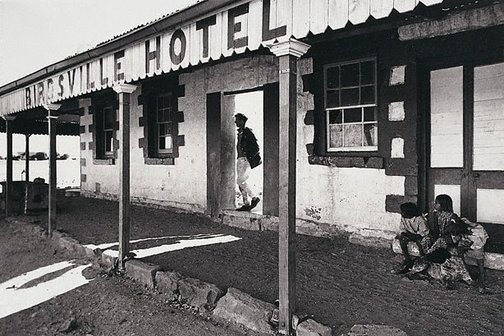 ‘I don't regard photography as an art form, although I know it can be for others … To me the camera is simply an unrivalled reporter's tool. It is an aid to getting the story “properly true”, as the Aborigines say.’ Jeff Carter 2006 1

For more than 60 years Jeff Carter has returned to the bush photographing, writing and working with ‘poor and unknown’ Australians. His images of everyday people from the Sorlie’s Travelling Vaudeville Show, the Wild Dog Fence, at rodeos, cutting cane, the hop pickers’ ball, to beach culture or the Melbourne markets, are some of the many pictures that tell stories and ask questions of Australian life. As a photojournalist Carter often supplemented his income with itinerant work. In the 1960s he travelled between the Kimberleys in Western Australia and Victoria following the Murranji, Georgina, Longreach and Birdsville droving tracks.

On the edge of the Simpson Desert and Diamantina River, the legendry Birdsville Hotel provides an oasis for the most isolated place in Australia on what was once the main stock route between Marree in South Australia and Birdsville in Queensland. Carter dramatically frames one side of the hotel with the use of strong diagonal architectural light and shade as Indigenous children sit on the stone step protected from the sun by the verandah roof. The hotel provides a place of rest for tired travellers, is traditionally rich in yarns and for some, cold beer, but these children wait and look enquiringly as a lone figure exits the bar, his body and shadow surrounded by light.

Purchased under the terms of the Florence Turner Blake Bequest 1991

Browse other works by Jeff Carter