The Centre for the study of adhocracy: producing singularities in a more and more standardised world (the bedroom) 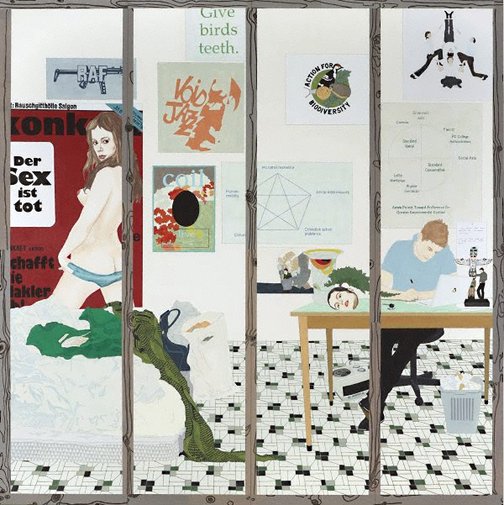 This work arose from an interest in the points where very every day, parochial actions intersect with ideological structures - how and when they intersect, and what potential there is in the slippage between the two for positive change.

This work is arranged like a bedroom where the walls are full of posters, and a boy is sitting at a desk working. This work brings together a lot of contradictory imagery and ambiguity. There is a pentagonal diagram that represents strategies for response if there's an outbreak of mass disease in a dense society, and then up in the corner there's a sort of human pyramid, and then these biodiversity and environmental awareness logos. Then the boy has his fan heater on, and he has a bin full of paper at his feet, and a set of car keys on the table, suggesting that he has these environmental beliefs that he stands for, but that he perhaps doesn’t triangulate how his immediate everyday actions impact upon the environment. He also has this poster of a magazine cover with a naked woman on it. The magazine is Koncret (concrete) which is a German 1970s publication, an extreme leftist publication run by Ulrike Meinhof who later went on to found the Red Army Faction. I chose this image because I was interested in it becoming a question about how whether this boy has this poster up because he supports this extreme leftist position, or whether he just likes having this semi-pornographic image on his wall, or maybe both - but setting up an ambiguity around that imagery. The boy is also working on a laptop, what was in 2006 a current laptop, but this has got a Linux penguin stuck over the apple logo. Linux is an example of an adhocracy- it's an open source operating system that can be used in place of OS X or Windows, and anyone can create their own version of it, tinker with the code and resubmit their version for others to download, so it branches off into versions, and it’s free. So the work presents a view into the living space of a boy who appears to be quite comfortable and middle-class, and his space is loaded with ideological signifiers. The work does not seek to make a flat statement about this boy's relation to these things, but perhaps to throw some questions to the viewer about how they may fit together to form his outlook.

acrylic and pencil on watercolour paper

Helen Johnson
The Centre for the study of adhocracy: producing singularities in a more and more standardised world (the bedroom)

Browse other works by Helen Johnson