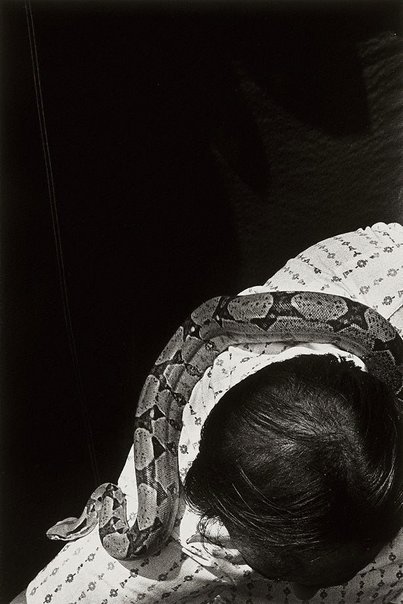 A dedicated modernist, Ralph Gibson incorporates elements of abstraction, fragmentation and isolation of form to create images that defy narrative and spatial coherence. Known for his evocative, yet allusive imagery of the female form, he employs surreal elements to confuse the image and create concrete illusion. Gibson took up photography during a stint in the Navy after which he studied photography and art at the San Francisco Art Institute. His experience as an assistant with Dorothea Lange and later, Robert Frank, exposed him to artists who had already made an enormous impact on the American social landscape. Gibson’s dedication to the art of photography has been substantial and includes the establishment of Lustrum Press in 1969 to publish the work of his fellow photographers.

Gibson’s use of reductive form to create mystery and illusion is evident in the following two works and reflects the influence of Edward Weston’s formalist approach to the subject. Using a sharp downward angle and stark contrast of subject and background, ‘Untitled (man with snake)’ is a formal study in pattern and form that defies any easy and immediate reading of the work. The use of sharp focus with tight cropping flattens the image and pulls the subject out of any contextual register causing recognition to slip and slide. The figure is disembodied, fragmented and tightly cropped to challenge space and perspective which, given Gibson’s reluctance to crop the negative, is achieved through great patience and skill. Using the emphasis of light and shade to create a formal study of the face, ‘Untitled (woman with cigarette)’ 1974 (AGNSW collection) recalls the fashion work by Man Ray in which half the model is blacked out to create a strange fragmentation of form (‘Fashion’ c1935). In Gibson’s image the woman holds up a cigarette with a gloved hand that visually slices into the face and creates an illusion of depth that flattens the cigarette, hand and model into a single graphic layer. The tight framing of the composition dissects the body, reducing its visual elements into geometrical values; ellipses, circles, rectangles, triangles and surface texture.

Browse other works by Ralph Gibson