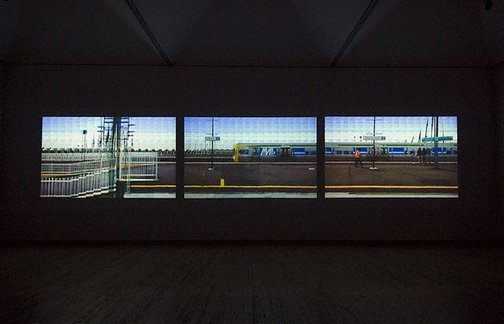 ‘Train No.1’ is part of Daniel Crooks’ ‘TimeSlice’ research project, which he has been developing since the late 1990s. Using timelapse and precision motion control rather than the single perspective that cameras and video usually presume, Crooks creates multiple simultaneous viewpoints. Time and space are distorted in the process, creating flattened images which unfold and ripple in segmented parts across the three screens of this projection. The objects and people filmed, in this case an inner-city train in Melbourne and its passengers, flicker in and out of the image as it moves; when the train stops and passengers alight, there is an intriguing after-effect across the screens as time is suspended but not quite simultaneously. This delay seems to fragment the world itself as it becomes crystalline particles, multiple moments which each seem to have their own time logic rather than the seamless continuum we usually experience.

While this rippling image/time is the result of Crooks’ temporal and spatial distortions, it also recalls late 19th-century experiments in visual perception and in analysing movement in space, such as the famous ‘Animal locomotion’ photographic series by Eadweard Muybridge and early moving image experiments by étienne-Jules Marey. They also inevitably recall paintings that referred to these early photographic and film developments, such as Marcel Duchamp’s ‘Nude descending a staircase’ 1912 in which the human figure appears mechanical, multiple and fragmented.

The recording of movement through space and of time passing is integral to the video and film mediums. While many artists have experimented with these inherent qualities in moving image media, Crooks has developed his own insights and technological solutions to express them. Contemporary life is frequently characterised as having sped up due at least in part to developments in digital technology. Yet Crooks deliberately cuts into time, stretches it and slows it in some frames and speeds it up in others to create the mesmerising snake-like movement through which we seem able to see time itself as both stuttering and liquid – unfolding before our eyes.

Browse other works by Daniel Crooks