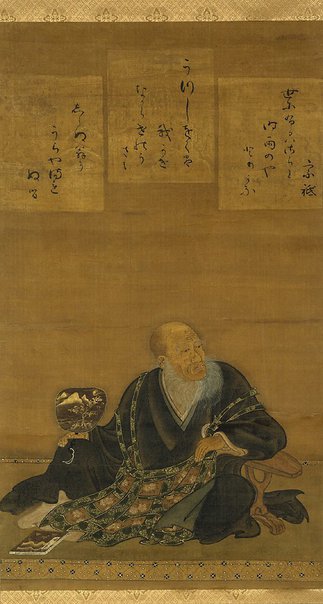 Iio SÔGI (1421-1502) is one of the most important poets in linked-verse (two or more people compose poems in turn, each person linking his poem to the theme of the previous one). While training at Shôkokuji temple in Kyoto, SÔGI studied various classical traditions from different teachers. In his 40s he left the temple and trained himself further in linked-verse poetry. He travelled between fiefs where he was invited to instruct this form of poetry which was widely practiced among the feudal lords and their associates. His acquaintances included the famous tea master Murata JUKÔ (1422-1502).

Portraits of famous poets are common, but they are usually those of the earlier Six Immortal Poets or the Thirty-six Immortal Poets of waka (31-syllable poem). Although 'renga' was also practiced among the nobles, it was favoured among educated members of the samurai class, often combined with the tea ceremony. In the Edo period professional 'renga' poets were given official position by the Shogunate to practice and coordinate poetry meetings.

Two of his poems are written above him. The first is a stanza written in the right panel: In my old age/ now I must watch the world?s storms/ from a makeshift hut. The second is a waka written across the two remaining panels: This is my portrait/ but I am envious/ with the painted old man/ who seems oblivious/ to the world?s troubles.