Mother India: Transactions in the Construction of Pain 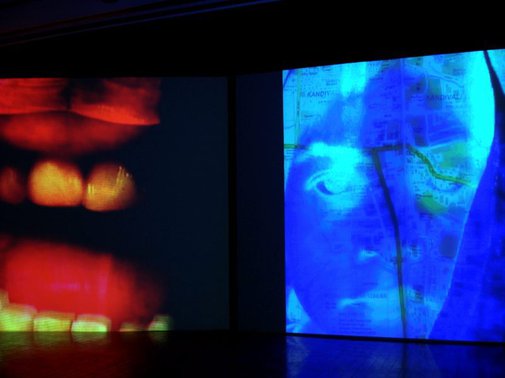 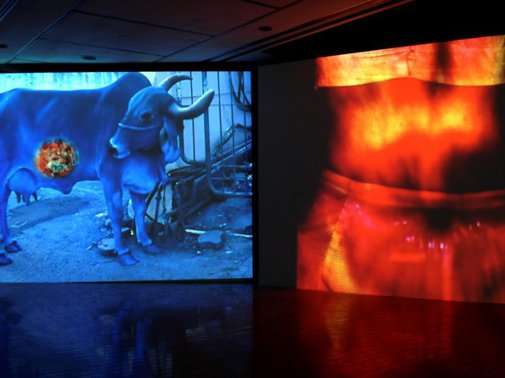 Realised on a scale that overwhelms the viewer, 'Mother India' is fifteen meters long. It is arranged in a semi-circle that wraps around the body of the viewer. The images that flicker across these five screens dominate their field of vision. This work brings the viewer into the space of partition and its aftermath in a very physical way.

The sequence opens with flags – emblems of national identity – converging on the face of Gandhi. This is followed by archival footage of women spinning, an image that suggests productiveness, it has been described by the artist as 'spinning the nation into existence'1. This image of spinning is emotive for Indian audiences, because it alludes to Gandhi, who was frequently depicted spinning. Yet it bathes the room in an anxious red glow. Footage of people moving during the partition, Indian deities, a pregnant cow, are all cut with dramatic representations of the female body. This sequence speaks of the project of nation building, which is at once generative and destructive.

Among the many depictions of women in this film, there is the figure of a woman superimposed over a map of India and Pakistan. In this image, the figure and the map become one, with roads, rivers and topographical details marking the woman’s skin. Her face is bisected by a border that cuts through her forehead and eye, splitting her in two. Place names also appear on her skin - and words that designate regions fall across her forehead, and disappear into the shadows of her face.

By mapping the female body onto the nation, Malani visually renders Veena Das' argument that the metaphorical conflation of bodies with the nation allowed "… the bodies of women [to become] the surface on which the text of the nation is written"2. Though never officially confirmed, there are many accounts of racist slogans being inscribed on the bodies of women during partition, and this image tacitly invokes these stories of both physical and psychological violence. Here, borders and place names read as wounds and scars on the surface of the body. This image makes the violence involved in establishing these national boundaries palpable, and relates it back to the violence against individual bodies.

A male and female voice are interspersed throughout the work. In keeping with the atmosphere of the whole film, these voices are fractured. Distorted by an echo, it is difficult to discern what they are saying. The work closes with images of the devastated landscape of Gujarat in 2002 after fierce rioting. In the centre panel, there is an image of Ghandi lying dead. Extending Das' argument, and bringing it into a contemporary context, this sequence of images links historical violence to contemporary violence. The simple device of sequential juxtaposition powerfully shows that the events of partition were echoed in the riots in Gujarat in 2002.

By visually imaging the partition and connecting it to present violence, Malani's empathetic and corporeal explorations of the body in pain work to connect the artist and viewer with the victims of partition and Gujarat. This work seeks to shape what Das described as "[…] a world in which one can dwell again, in full awareness of a life that has to be lived in loss"3.

Nalini Malani
Mother India: Transactions in the Construction of Pain

Browse other works by Nalini Malani