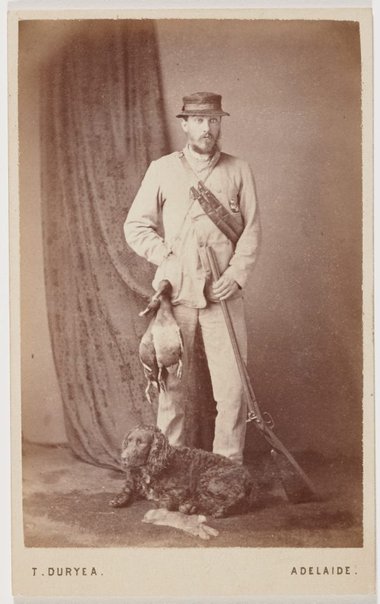 The brothers Townsend and Sanford Duryea were American-born professional photographers who founded photographic studios in Melbourne, Geelong, Adelaide, Hobart and Perth in the 1850s. Townsend had established a daguerreotype studio in Brooklyn in 1840, only a year after the process had been made public, and in 1853 arrived in Melbourne, followed by Sanford in 1854, where they established two studios in collaboration with Archibald McDonald. In 1855 the pair opened a studio in Adelaide, trading as Duryea brothers. Business thrived, and in 1856 they made a tour of the state, offering their services in a number of country towns. In 1858 Sanford opened the first photographic studios in Perth and Fremantle. During the early 1860s the Duryea studios were renowned for their fine quality cartes de visite portraits. Sanford returned to New York in 1863 but Townsend remained in Adelaide, where his studio was the busiest photographic practice in town, in possession of over 47,000 negatives by 1870. In addition to portraits, Townsend made panoramas and was appointed official photographer to the royal tour of HRH Duke of Edinburgh to Adelaide in 1867, capturing him on a kangaroo hunt. From 1892 to 1906, Richard and Frank Duryea, sons of the late Townsend, reopened the Duryea Brothers studio, trading as itinerant photographers in South Australia.