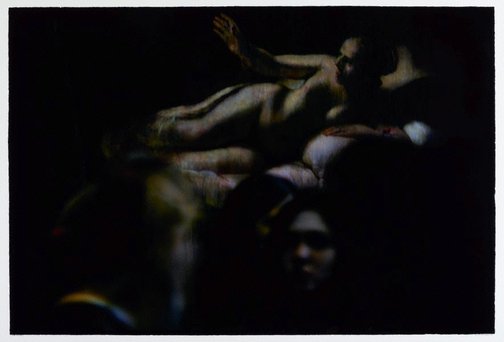 The latest works by Bill Henson owe something to both Rembrandt and Caravaggio – for the ways of modelling objects in space out of light and dark as much for the melancholy of the former and the drama of the latter.

The representation of a ‘crowd’, to be seen in the picture taken at the Hermitage, St Petersburg, is one of the first for nearly three decades. The interaction between the onlookers and the gesture of the painted figure above (‘Danaë’ 1636 by Rembrandt) leads the viewer into a complex and mysterious web of bodies where all is fading into darkness. The gradual dissolution of the figure is not new in Henson’s work and was present in some of his earliest pictures from the late 1970s. Further, his work has depended on single figures for some years so in several ways this is both a departure and a return.

The figure of the young nude woman, examining her foot, is more sharply outlined and dramatically lit than that of the crowd. The body’s length and strength is clearly expressed in the classical pose and simultaneously opposed by the colouration which is that of the inevitability of decay.