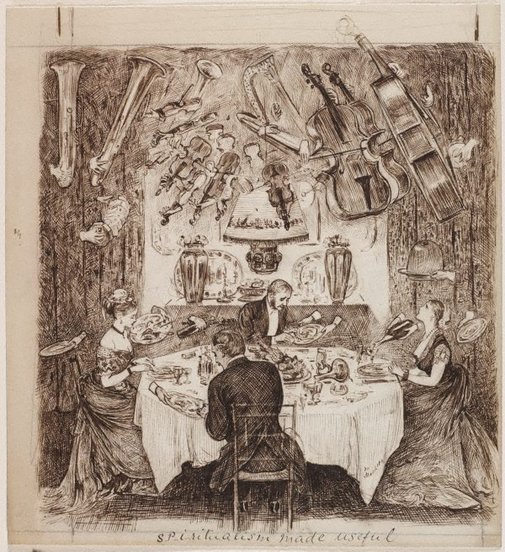 George du Maurier grew up in Paris in a bilingual family. He went to London to study chemistry but soon gave up and returned to Paris as an art student in 1856, enrolling in the studio of Charles Gleyre and making friends with James Abbott McNeill Whistler and Edward John Poynter. He later romanticised this period of his life in his novel Trilby (1894), an instant bestseller adored by the public and critics alike. Du Maurier moved to Antwerp to further his training but the loss of sight in one eye hindered him from following his intended path to becoming a serious painter. Instead, he decided to concentrate on black and white work, a branch of illustration that was blossoming in the 1860s in innumerable books and periodicals.

In London du Maurier worked as an occasional illustrator before joining the staff of Punch in 1864 as a social cartoonist. Founded in 1841, the weekly magazine became something of a national institution and a staple of middle- and upperclass drawing rooms across Britain, amusing readers with its irreproachably tasteful humour and satire. It is in fact to Punch that we owe the modern meaning of the word ‘cartoon’, first coined in the journal’s pages in 1843 in reference to a comic political illustration (as opposed to a full-scale preparatory drawing used for transferring a design from paper to another surface).

Du Maurier’s association with Punch lasted more than 30 years until his death in 1896. As one of the great comic draughtsmen of the Victorian period, he is especially remembered as the arch observer of the manners and mores of the upper classes, targeting in particular the nouveaux riches, philistines and aesthetes. He drew his cartoons directly on the wood block for the engraver to follow, but as his eyesight worsened in the early 1870s he worked on paper. An accomplished writer, he also composed his own captions, although to the modern ear accustomed to brevity these can sound long-winded and cumbersome.

Spiritualism made useful appeared in Punch’s Almanack (as it was always spelt) of 1877. The drawing lampoons the Victorian spiritualist movement, which by the 1870s had grown into a thriving subculture with its own societies, specialist publications and celebrity mediums. It shows two couples in evening dress seated at a round table – a witty reference no doubt to the typical séance arrangement, where a presiding medium would attempt communication with the ‘other side’. But instead of the usual table rapping and tipping by which means departed souls manifested their presence, in this drawing the conjured spirits obligingly perform the double duty of serving food and wine and providing the evening’s orchestral entertainment. Meanwhile, the diners preserve their British sangfroid, blithely unperturbed by the spectre of disembodied hands swirling around them.