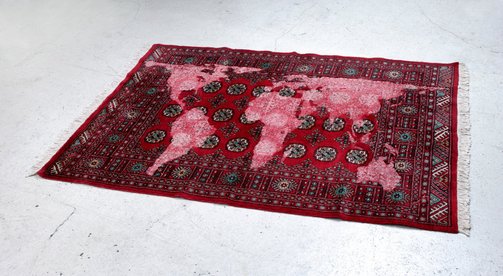 Mona Hatoum often works with domestic objects and objects the West associates with the Arab world. Her work deals with issues of displacement and identity. She has said: “…my work is about my experience of living in the West as a person from the Third World, about being an outsider, about occupying a marginal position, being excluded, being defined as ‘Other’ or as one of ‘Them’.”1

'Bukhara (red)' is a Persian style carpet similar to those that furnished her childhood home. Areas of the weave have been removed from the carpet as if moth eaten or worn in some way to form the Gall-Peters equal-area projection of the world map, which rescales the continents according to their true proportions.