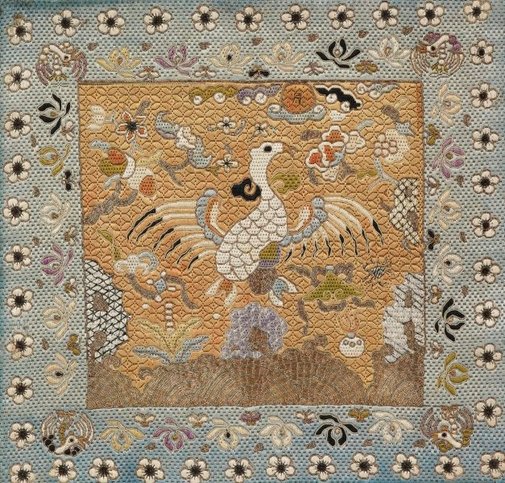 It has been recorded that rank badges were introduced to Annam in 1744, when the king had decided they should assume Chinese style clothing (kingdom of Annam was a former state in Vietnam). In 1790, upon a visit by a king from Annam to China, the Qianlong emperor presented robes of the second rank which had golden pheasant badges on it. Military officials indiscriminately started decorating their badges with golden lions, while the king wore golden embroidered winged lions, and civil officials wore birds. In 1806 a decree was issued asserting the type of birds and animals civil and military officials could wear. All rankings were one step behind the equivalent Chinese ranking system, as no one could be ranked as highly as the Emperor. The rules stayed in place right up to the time of French rule of Indo-China. Much of the information we have about the introduction of rank badges was recorded by a German Jesuit, Father Koffler who was in Hue in 1744, acting as the physician to the king. However there is generally little known about Annamese rank badges due to the fact that few badges, portraits and records survive from the period.

This Vietnamese badge depicting a rooster was the type of badge worn by a 3rd rank civil official. The rooster at centre faces right; the moon above it has the Chinese calligraphic character for moon at its centre ('yue') indicating this badge was attached to the back of a robe, as Vietnamese badges depicting the sun are placed at the front of a garment and moon on the back.

The bird insignia is surrounded by auspicious symbols such a bat, peaches, rocks, clouds and further auspicious motifs are included on the elaborate border. The border has a floral design with four roundels at each corner of stylized depictions of the rooster. It is also composed of an outer line of prunus flowers with lotus flowers forming the central decorative element and tiny butterflies bordering the inside section of the badge. Between the lower rock form and the Sheng symbol on the right of the badge is a tiny crab. It is not unusual for Vietnamese badges to have these aquatic creatures.