Stele of a Buddha flanked by two bodhisattvas 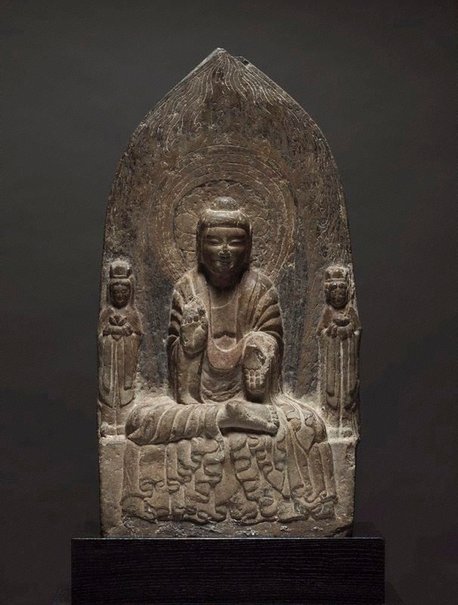 The leaf shaped stele is carved on the front with Buddha seated with hands in 'abhaya' and 'varada mudra'. The figure is dressed in a voluminous robe falling in thick folds over the shoulder and arms and cascading down the base in undulating pleats - a characteristic feature of Chinese Buddhist sculpture of the Northern Wei period. The figure's full face, with a smiling contemplative expression, however suggests a later date, circa late Northern Wei or early Eastern Wei period. The Buddha is flanked by a pair of Bodhisattvas, each wears loose robes, a crown, and holds a lotus to the chest.

The group is backed by a 'mandorla' composed of incised parallel lines with a halo of overlapping petals enclosed by concentric circles behind the head. The reverse of the stele is incised with a similar group of a central seated figure of Buddha, flanked by a pair of Bodhisattvas, each on a lotus pedestal, bearing a lotus, in a setting of trees and mountains. The surface of the stone is smooth with traces of red and black pigments. The other two sides of the stele are incised with names and titles of donors, including two monks, two nuns and two laymen on the left, and two lay disciples on the right.

In China, it was during the Northern Wei period that Buddhist stele emerged as an important sculptural medium, being linked to the 'devotees' future life through personal devotion or accumulation of merits. This stele is a very fine example of the activity. Beside its excellent figurative configuration and carving, the inscription, though lacking a precise date, provides much information on its past function and significance. It would appear that in this case, the stele was raised by donors of a collective group, including Buddhist monks, nuns and lay disciples from a Buddhist devotional 'yi' society. The fine carving on the reverse suggests that the stele was once placed on main roads and other public places, or in a free-standing situation within a cave or temple, serving the purposes of adoration.

limestone with traces of pigment

Stele of a Buddha flanked by two bodhisattvas