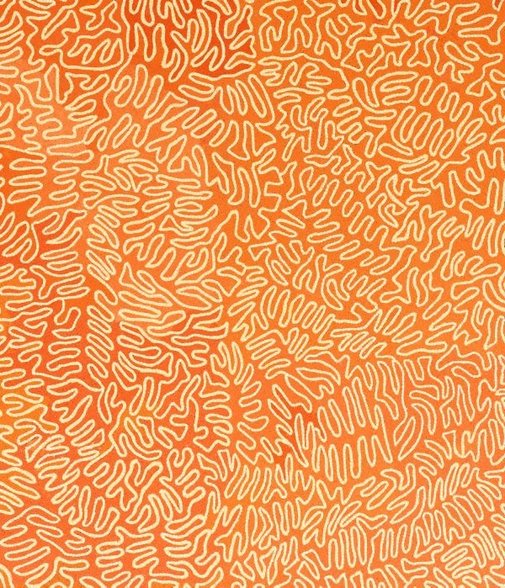 Joseph Jurra Tjapaltjarri was born at Kiwirrkura and, like so many Pintupi people, encountered Jeremy Long’s Northern Territory Welfare branch patrols in 1962 and 1963. In 1964 Tjapaltjarri and his family came in to Papunya with one of the patrols. Following the death of his father Tjapaltjarri was raised by Willy Tjungurrayi and Yumpululu Tjungurrayi. Tjapaltjarri attended both Papunya and Yuendumu schools and later worked for the Yuendumu Council and Papunya Canteen. In the early 1980s Tjapaltjarri assisted Charlie Tararu Tjungurrayi with his works and credits him with teaching him how to paint. He began painting in 1986 and was soon recognised for his efforts. In 1997 Tjapaltjarri travelled to Paris with Turkey Tolson Tjupurrula to complete a sandpainting for the exhibition 'Peintres Aborigines d'Australie' at the Etablissement Public du Parc de la Grande Halle de la Villette. In 1999 and 2000 he was Chairman of Papunya Tula Artists.

This painting depicts designs associated with the creek and rockhole site of Yunala, west of the Kiwirrkura community in Western Australia. In ancestral times a large group of Tingari men came to this site before travelling north-east to Tarkul, north of Winparku (Mt Webb). At Yunala the men dug for the edible roots of the bush banana or silky pear vine Marsdenia australis, also known as yunala, which is plentiful in the region. The sinuous lines in the work represent the root system of the plant growing out from the main water source.

Since events associated with the Tingari Cycle are of a secret nature, no further detail was given. Generally, the Tingari are a group of ancestral beings of the Dreaming who travelled over vast stretches of the country, performing rituals and creating and shaping particular sites. The Tingari men were usually followed by Tingari women and were accompanied by novices, and their travels and adventures are enshrined in a number of song cycles. These ancestral stories form part of the teachings of the post initiatory youths today as well as providing explanations for contemporary customs.