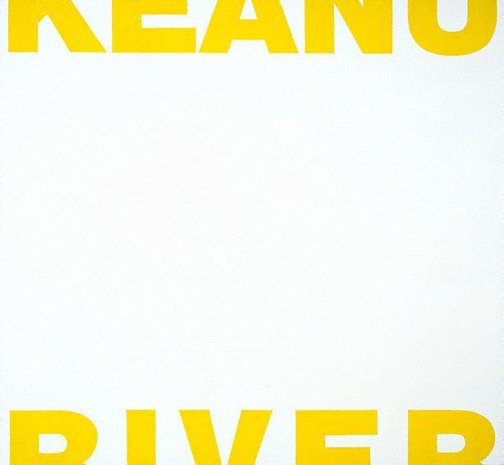 Scott Redford's layered body of work embodies a synthesis of regionalism, identity, abstraction and pop culture. He is one of Australia's finest 'post-conceptual' painters, as well as working with sculpture and photography.

Redford has exhibited widely in Australia and the very extensive literature on his practice, including two substantial monographic publications, is an indication of the appeal his work has had to writers, critics and other artists. In addition to a very sophisticated engagement with current theoretical concerns, his work is very accessible as he utilises a visual language derived equally from abstract painting and pop/media culture. He has been influential on a younger generation of artists, an influence which has at times has been overlooked, perhaps because of his resolute commitment to staying in Brisbane.

'Untitled (Keanu crying for River)' 1997 situates modernism, and in particular minimalist painting, in a matrix of poignant desire and improbable readings of mainstream media. This work uses language as object and as reference. The letters have a formal harmony in their placement on the edges of the canvas, defining the white field just as they bleed out and imply it extends beyond the canvas through their incompleteness. At the same time their half-life as words recalls the half life of implications and rumours that surrounded the appearance of Keanu Reeves and River Phoenix in the now cult movie 'My Private Idaho'. In this film River Phoenix, like Reeves an upcoming Hollywood Star, famously adlibbed his lines to declare his love and passion for Keanu.

This cinematic moment was a queer interruption in the circulation and reception of popular images of masculinity and desire, one which did not quite add up and yet still made sense. River's subsequent death gave even greater poignancy to this scene and its afterlife. Redford's contemplation of both the distance and availability of modernism is often intimately connected in his practice with a play on the distance and availability of pin-ups and icons and of how identity is situated in a matrix of desire and emulation.