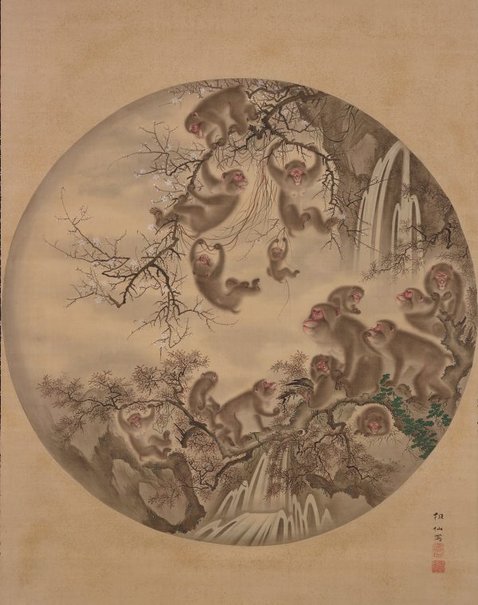 Mori Sosen (1747-1821) was active in Osaka during the Edo period. He first studied Kanō painting and then became part of the Shijō School, whose style advocated Western inspired realism.

By the time Mori Sosen was 61 years old he changed the first character in his name (so) to mean ‘monkey’. Rather than the traditional practice of copying the paintings of master painters to perfect technique (in this instance usually original paintings of animals by Chinese artists), Mori Sosen is said to have lived in the mountains to learn how to depict animals in a more compelling and realistic manner. Contemporaries such as Maruyama Ōkyo (whose work Cranes, c.1770-1772 is in the AGNSW Collection) were at this time also creating works from sketches of real life.

The Dutch orientalist, Robert van Gulik (1910-1967), had designated Mori Sosen “undisputed master” for his skilful depiction of the animal. It was uncommon to see monkeys in the flesh in Japan, but on the rare occasion that a gibbon was brought to Osaka in 1809 (most likely from Indonesia and brought in on a Dutch ship) it was noted that a large crowd had gathered to witness it and Mori Sosen had made a visual record of the event. Monkeys have been traditionally very popular in Japan, whether they were depicted as characters in nō or kabuki theatre, or as part of the Monkey Deity associated with Buddhist and Shinto belief.

The painting depicts a group of fifteen monkeys, who have come out to play as the season changes and the trees start to bud with new blossoms. Each monkey has its own unique, almost human facial expression, whether it is sleeping or making gestures with its mouth and teeth. Delicate brushstrokes provide a life-like appearance of soft fur on the body of each animal. The painting is a rare example of this subject depicted in a circular shape. The shape itself may be an allusion to the viewing of the scene through a telescope (a device brought to Japan by Dutch traders) providing a voyeuristic view of the monkeys at play. The round shape could also be an allusion to the moon in reference to monkey and the moon stories in Japan.