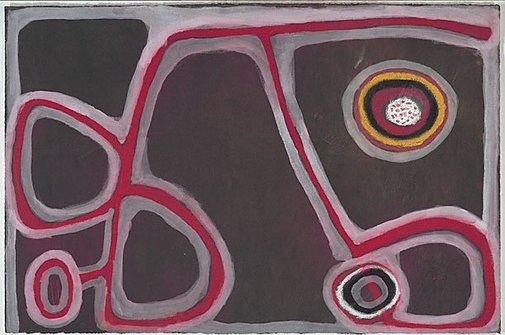 Paddy Bedford was born at Bedford Downs station southwest of Warmun (hence his name) and worked as a stockman on several Kimberley stations before eventually moving with his family to Warmun. As a senior law man Bedford has been involved in painting as part of ceremony all his life. He began painting on canvas for exhibition after the establishment of Jirrawun Aboriginal Art Corporation in 1997. It is an indication of his aesthetic vision and ability that he has captured the attention of the art world and is represented in several major collections including the Art Gallery of New South Wales. In these paintings on paper Paddy Bedford uses colours such as bright red, yellow and blue that are not part of his usual palette as he generally paints with crushed ochres, the natural pigments of the east Kimberley, which have a much more subdued quality.

Browse other works by Paddy Bedford