Pair of phoenix and dragon badges 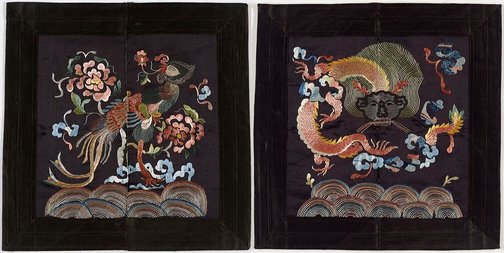 The front of one badge depicts a phoenix holding a floral sprig in the mouth standing on semi circular waves of the sea amidst floating clouds. Apparently, the phoenix body is a composite: the head symbolises the sky; the eyes, the sun and moon; the wings, the wind; feet, the earth; and the tail, the planets. In the early part of the 20th century women wore robes that were split down the front and the badge featuring the phoenix has a spilt at the front.

The dragon, a symbol of power and nobility in Vietnamese mythology, possesses the head of a camel, horns of a deer, eyes of a fish, body and neck of a snake, scales of a carp, claws of an eagle, and feet of a tiger. These qualities are present in the second badge that features a four clawed dragon indicating the badge would have once decorated the official dress of a high dignitary of the Royal Court. The official dress of the emperor was a five clawed dragon.

Gift of Judith and Ken Rutherford 2006

Pair of phoenix and dragon badges