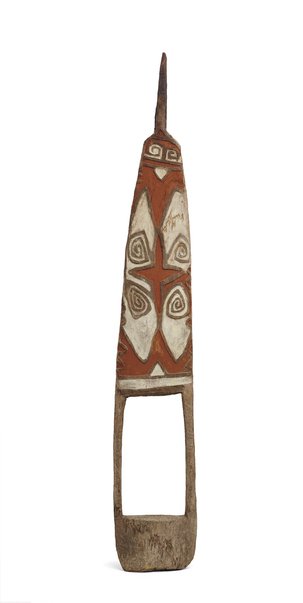 This carved and painted board was bought from the son of its maker, Kwengkalanengim, from Oksivip village in 1968. Kwengkalanengim carved the board with steel tools soon after the Australian administration's patrol post was established at Telefomin in 1948.(1) He felled a 'dem' tree (heavy wood) and cut three boards from it: two for attaching to the Oksivip men's houses and one for a war shield. This board was attached to a men's house ('kawelam' or hornbill house); the other was attached to the cult house ('yolam' or sacred house); and the shield ('atkom'), although carried to a fight against the Falamin people, was not used.

In the villages of the Telefolmin of the Ifi and Elip valleys, and of the Falamin and Ulapmin in the New Guinea highlands source basin of the Sepik River, 'amitung' (house boards) were attached to the front of 'unangam' (woman house or family house), 'kawelam', 'yolam' and sometimes 'katibam' (little house, for the old men), so that the hole in the lower end of the board coincided with the small entrance to the house.

In villages of neighbouring peoples – the Tifalmin and Wopkaimin to the west, the Fegolmin and Angkeiakmin to the south, and the Oksapmin to the east – carved and painted boards were attached only to the front of men's ritual houses.

In the men's ritual houses, boys and young men passed through several stages of initiation into the mysteries of the ancestors and the rituals that ensured the growth of the staple crop (taro), the health and welfare of the community, and success in hunting and warfare.

The designs carved and painted on the house boards are essentially the same as those on the shields. Among the Telefolmin there were three or four basic designs that waxed and waned over the decades. The design on the board from Oksivip was favoured in the late 19th and early 20th centuries; Kwengkalanengim was probably replacing an older board of that design. The design on a house board at Angkemavip was one that became popular during the 1950s and 60s.

The whole design was not given a meaning but individual elements (such as spirals, triangles and central rhomboids) could be named, although different names might be given by different informants. The zigzag on either side of a board was invariably called a snake; a small white triangle at the top or bottom could be the conus shell neck ornament; a central circle or rhomboid could be the heart, liver or belly of humans, animals or spiders; spirals could be the tongue of a butterfly or the spiral tail plumage of the King Bird of Paradise (Cicinnurus regius). This bird was of particular significance on account of its habit of nesting in tree hollows (like the 'kawel' or hornbill), and its bright red plumage referring to the red ochre mixed with pig fat painted on young initiates before they emerged from the 'kawelam' or nesting hollow.

The presence of the government administration, the activities of missionaries and the Ok Tedi copper mine have changed these societies in Papua New Guinea. Traditional initiations have ceased, ancestral relics have been discarded and house boards and shields are almost all gone. Taro is being replaced by sweet potato as the staple crop, and many families rely on money to purchase rice, tinned meat and fish. Telefomin and the mining township of Tabubil each have a high school, and mobile phone technology is expanding in the region. New generations are growing up with little knowledge of the traditions of 50 years ago.

© Telefolmin people, under the endorsement of the Pacific Islands Museums Association's (PIMA) Code of Ethics